Prospect general secretary Mike Clancy made a strong case for regulation and enforcement in his opening speech to the union’s conference for health and safety reps in early April. 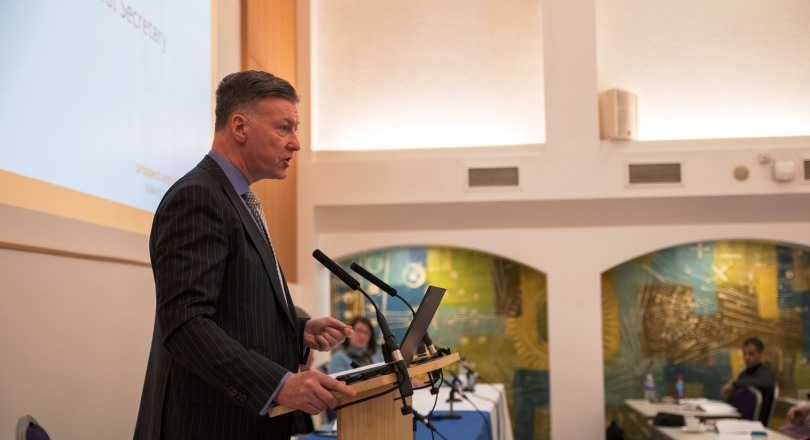 The event, called ‘The path to prevention’ focused on stress aimed to give reps practical solutions to take back to their workplaces.

Mike began with his take on the political context and his anger and disbelief at the current state of affairs.

He stressed that the union fiercely defends its political independence but said it was “impossible not to take a view on the utter breakdown of our political process.”

Ministerial posts are unfilled and government has no champion on issues like disability.

European Union frameworks support the laws that apply in the UK. Regulation is the best way to conduct business.

“Critics say regulations are synonymous with red tape but they are key to good business and a good economy,” he said.

He told delegates that he did not believe the government’s pledges about non-regression clauses protecting employment rights and standards.

These clauses prohibit trade partners from weakening or not enforcing laws to benefit trade or investment.

“Non-regression clauses won’t protect what we stand for in decades to come.

“Look at parliament’s record on regulations and standards that are not underpinned by EU frameworks. It’s a fact that those laws get diminished.

“I can’t think of a centre right government since the 1970s that has enacted or improved legislation on trade union rights,” he said.

Pointers to the future include attitudes to regulation, for example the working time directive, that many politicians want to remove, he added.

The department for business is looking at having one single enforcement body for safety and workplace rights.

But the one thing agencies like the Health and Safety Executive and the Gangmasters authority have in common is that they are all under-resourced, Mike said.

“And there is a big difference between inspections covering wages, modern slavery and health and safety,” he added.

He feared that regulatory convergence will be about doing the same, or less, cheaper.

The mantra is all about deregulating and undercutting rather than innovating, he added.

“There is a fundamental problem with the short-term nature of our capitalism.”

He also didn’t buy the government’s recent conversion to dialogue with the trade unions.

The outcome of the Brexit debacle would be crucial to union reps. HSE and ACAS, the conciliation service, are the only two agencies with any real weight.

“There is no weight to the voice of working people,” he said.

Many people in the room are experts in their fields, said Mike.

“Society needs to value, celebrate and listen to its experts – especially on health, safety and well-being. We need a renaissance of experts.”

The rise in stress and mental ill health was no surprise given the rolling back of trade union influence and collective bargaining over the past three and a half decades.

He highlighted the wrong use of performance management – it is used to get rid of people and ratchet up pressure on workers.

This is the cost of the drop in collective bargaining coverage and the absence of union reps on the ground, he said.

“Without the backing of a trade union, people won’t have the confidence to speak truth unto power.

“Think about how your workplaces would be if you weren’t there. You are key to what happens next. How fair, equal and safer people are is down to you,” he concluded.