More than 20 young Prospect members working in the defence sector were told by Stuart Andrew MP, the minister for defence procurement, that they are unsung heroes keeping the nation safe. 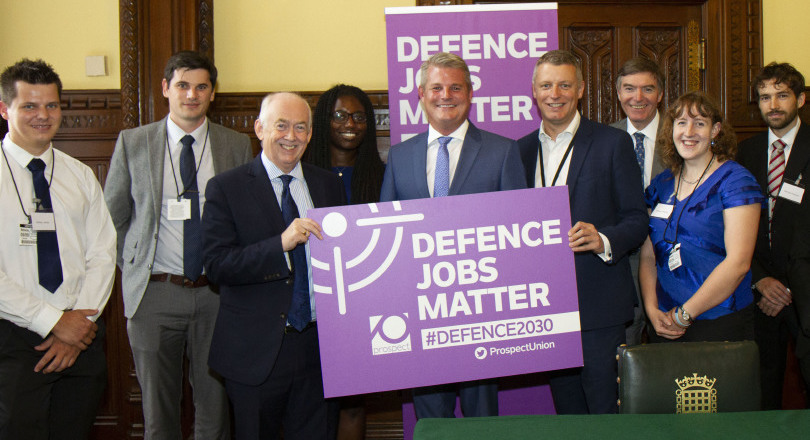 The YPN members, from a range of defence employers in the private and public sectors, heard from a number of MPs at the Palace of Westminster and at New Prospect House, during a special programme of talks and meetings about the future of defence jobs.

The event on Wednesday, 5 September was triggered by the findings of a recent Prospect survey of members in the defence sector, which showed that workers were overwhelmingly more pessimistic about the industry and feeling less secure in their own jobs.

However, while acknowledging their concerns, defence minister Stuart Andrew MP, told Prospect’s young members that they have every chance to succeed despite the challenges and complexities ahead.

“We are surrounded by people who have the energy, expertise and enthusiasm that we need. Basically, people like yourselves,” the minister said.

“You are our engineers, our designers and managers. You are unsung heroes, and are really important to our armed forces.”

“Technology is advancing at an unprecedented rate and our adversaries will find new vulnerabilities to attack our space and information. We have got to do everything we can to keep up with that.

“We’ve got to take advantage of the skills that we will need in areas such as autonomy, artificial intelligence and machine learning. But it means depending on people with the skills and ability to maintain our edge over competitors. So the success of our nation, depends on your future prospects.”

Earlier in the afternoon, delegates had been welcomed by Garry Graham, Prospect deputy general secretary, at New Prospect House where they had a working lunch and were given presentations on lobbying and briefing MPs.

“You are the lifeblood of the union,” Graham told them.

“We want you to go back to your branches and speak to your fellow members about what Prospect does for you in defence. We have long called for a coherent industrial strategy for defence in the UK, in terms of our economic success and the important contribution that it makes at a local level. We very much see today, and your involvement, as part of that.”

The first guest speaker of the day was Luke Pollard MP, whose constituency encompasses Devenport dockyard, the largest naval base in Western Europe.

“Politics and defence don’t always go together,” he said. “I’ve spent much of the last year just being vocal about our situation at Devenport, and the programmes that we’ve lost, or are at risk.”

Another speaker was Paul Everitt, the head of ADS, the trade body that represents the UK aerospace, defence, security and space sectors. He proclaimed that with areas such as cyber-security and space, the defence sector was well poised to offer “challenging and interesting careers” for a long time to come.

The second half of the afternoon was spent in the House of Commons, where Nia Griffith MP led a round-table discussion with delegates. She made the case for investment in defence and meeting the NATO target of spending at least 2% of GDP on defence, which, in turn, would help to support the economy and jobs.

She was also pressed hard on the Labour leadership’s alleged lukewarm support for the nuclear deterrent. The MP emphasised that it was party policy to support Trident.

Griffith added: “Now, more than ever, in a very uncertain world it is absolutely no time to be cutting back on defence capabilities.”

Philip Dunne MP, the former defence procurement minister, also spoke to the group. He had recently published a study on the defence sector’s contribution to the UK economy.

“You’re in a much bigger industry than you might realise. There are 500,000 people involved in defence in this country. Half of them are in uniform and the civil servants that support them. The other half are in industry supporting defence manufacturers.

“That means one in every 65 people are engaged with the defence sector. This may be controversial, but I think you are in a very stable industry. I don’t see defence spending going down under any political government. I think the opportunity is for increased investment.”

The Commons meeting was also notable for a couple of Prospect members having the opportunity to share their experiences and concerns directly with MPs.

Rebecca Waring of the Atomic Weapons Establishment said the whole future of her employer was waiting on a government decision on commissioning a Trident warhead replacement.

She said: “This is something the government was going to decide back in 2006. But it has been continually pushed back. The uncertainty means older people who worked on the original systems are leaving and so are younger workers."

“We just need a decision, but in the meantime the government can help by changing the vetting process. You can be offered a job but won’t be able to start for over a year while you’re being vetted. It can also help by supporting STEM subjects, especially to minority groups, and publicly recognising the UK's contribution to science and engineering.”