Key workers at the Royal Museums Greenwich (RMG) will strike on New Year’s Day following new contracts being imposed on staff in November. 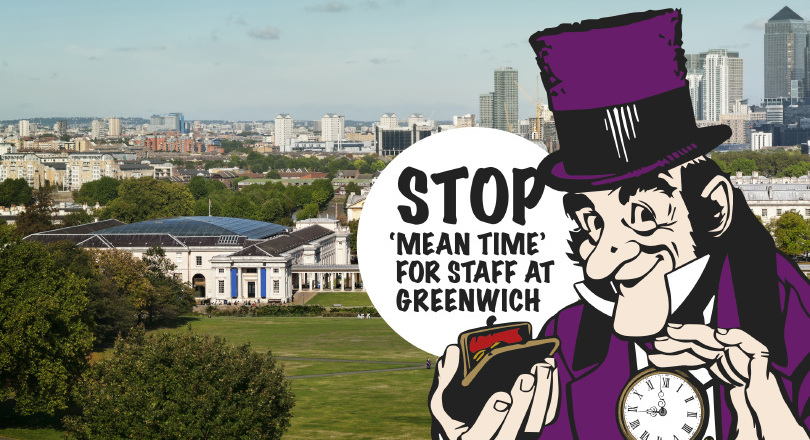 Changes have been made to the contracts of visitor and sales assistants working at the National Maritime Museum, Queen’s House and Royal Observatory Greenwich.

The latest terms and conditions mean that those affected are no longer entitled to paid breaks and the hours their shifts can fall within have been increased.

Shifts, for many previously scheduled from 9:30am – 5:15pm, can now fall between 8am – 8pm, which limits opportunity to earn overtime. Breaks are now unpaid and many have lost up to 40 minutes of break time per day, which they must now work. In effect staff will be working an extra 3 weeks a year without proper compensation.

The museum has increased the hourly rate by up to 3% following talks with Prospect. However, had they kept paid breaks without the 3% pay rise, staff would be better off when National Living Wage 2018 is increased.

Prospect members were balloted on strike action at the beginning of December and have now decided to strike. Of the workers entitled to vote 68% responded to the ballot with 85% supporting strike action. Workers will walk out on 1 January for one day only. The aim is not to stop the public from visiting the Museum but to highlight the treatment our members are facing.

Prospect negotiations officer Caroline Hemmington said: “It has been a very difficult decision to take strike action.
“However, negotiations with RMG and subsequent changes have left staff feeling undervalued with no other option.
“Prospect is calling on the RMG to give back decent breaks or compensate accordingly. Ultimately, staff want to see their employer join other leading organisations in paying London Living Wage.