A determination to fight for a better world and a hatred of bullying and abuse of power have motivated Denise McGuire, Prospect’s outgoing president, all her working life. 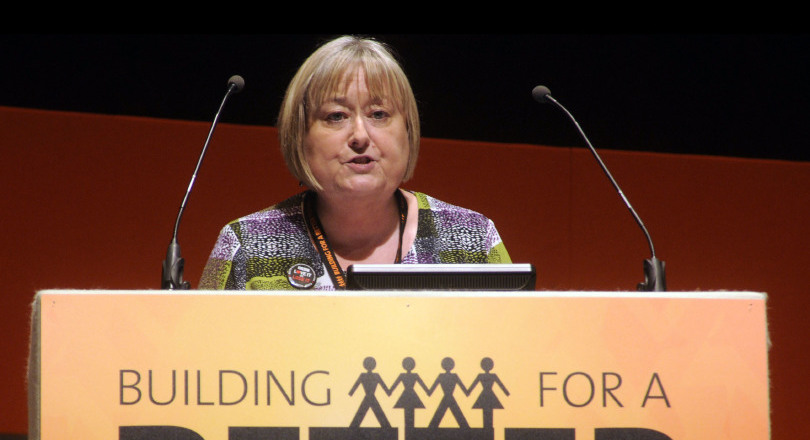 Denise is stepping down as president after serving for two years. During that time she led the union’s work on neurodiversity and spoke at events in the House of Parliament to promote awareness of the employment issues faced by neurodivergent members.

She is most proud of the work she has done on equalities: “I’ve worked on women in science, engineering, technology and maths and built a relationship with the Institution of Engineering and Technology. This included chairing two of their working groups on women’s employment. I have also done joint work with the teaching unions.”

Denise joined the union, the Society of Post Office Executives, when she started at BT. SPOE changed its name to the Society of Telecom Executives and then to Connect before merging with Prospect in 2010.

“My manager was on the Standing Orders Committee. When I told Grace I was interested in getting involved in the union, she took me along to the branch committee meeting and I was co-opted onto the committee.

“A few months later, conference was close and one of the branch delegates had to drop out. Grace told me I could attend, so I became the replacement delegate and was off to conference. Being at conference really hooked me – and that was the start of a lifetime of union activity.

“Until the last few years, I held a BT job, with my facilities time not exceeding 50% and sometime being just 20%. I did a lot of juggling, working at the weekend to make up for union work done during the week – and vice versa! I got promoted several times, including while I was President of Connect.”

Denise says the biggest challenge has been time – balancing work, home, union, health and self.

Connect also gained recognition in Vodafone – the only breakthrough from greenfield recruitment in a FTSE 100 company.

“I am pleased to have presided over Prospect at a time when it is learning the organising culture. We have a way to go on embedding this culture throughout the union, but we can take pride in having turned a corner and started to see membership numbers growing.

“I hope I have been respectful, welcoming and friendly to the members from BECTU who joined us in 2017 and I have tried to ensure they had a soft landing in Prospect.”

Denise has also been active in international unions. She was elected world women’s president of UNI Global Union in 2008 and will step down in a few weeks.

“In that role I was one of eight worker experts on an International Labour Organisation panel on violence in the world of work. With some lobbying, that will lead to the adoption of the first International Convention and recommendation on this important issue at the ILO in 2019.

“I also led the policy work and moved the rule change that resulted in a UNI policy of a minimum of 40% women and 40% men on all UNI decision making bodies, significantly increasing women’s involvement.

“This has led to a more diverse and inclusive organisation and thus to better decision making.”

On what unions should be doing to attract young workers, Denise says: “We need to interact with them in their world and in their words. There’s no short cut to doing the recruitment and organisation work in all our industries.”

She joined BT in 1980. “On my first day with BT, I reported to Alder House, near St Pauls. I signed the Official Secrets Act and forms for my pension and was taken to my office, off Fleet Street.

“We stopped along the way for my colleague to take photographs as the Queen Mother’s 80th birthday procession went from St Paul’s to Buckingham Palace,” she recalls.

One of her proudest career moments was achieving the reinstatement of International Direct Dialling to Moscow in the days of the Soviet Union and its extension to many other cities in the USSR, making it much easier – and cheaper – for people to communicate. She was invited to a function at the Soviet embassy to celebrate!

“I also worked in Bermuda, setting up the processes and procedures to comply with all the regulations for operating in Bermuda and won the first president’s award in the new company, Concert, a joint venture between BT and AT&T, a US telecoms company.”

Prospect reps, members and staff extend huge thanks to Denise for all her hard work during her presidency.