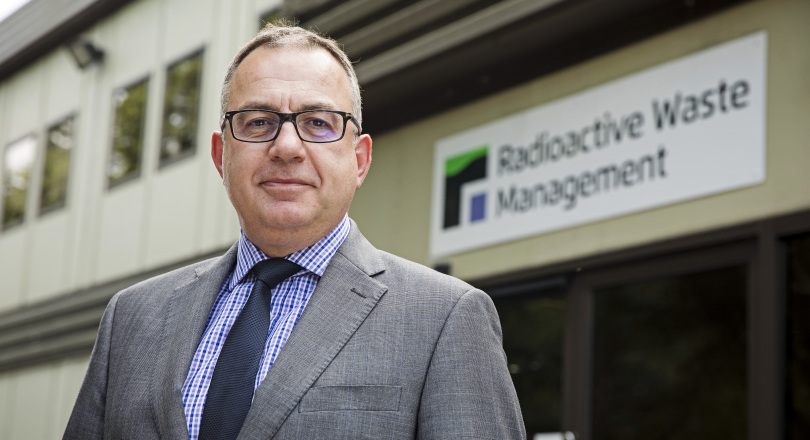 You could say that, in one form or another, radioactive materials has followed John Corderoy around his entire career.

After a short stint at university, John decided he was looking for a more practical start to his career, so he joined the Royal Navy as a submariner and spent more than a decade on ships and submarines around the world.

With the Navy’s engineering college, he trained as an engineer, and would come to specialise in looking after the nuclear reactors on submarines.

As he gradually moved into senior leadership roles, he found himself back on dry land, at the Ministry of Defence in Whitehall and even, for a couple of years, in the United States working on their nuclear propulsion programme.

In 2013, back in Britain, he was put in charge of the UK’s nuclear power programme for the Navy, looking after the 11 nuclear powered submarines and their reactors.

“As the steward of the Navy's nuclear power programme, I was well aware that the Navy generates radioactive waste,” he says.

However, at the time, although he knew the spent fuel ended up at Sellafield, he hadn’t given that much thought to ‘the other parts of the jigsaw’ for the safe and long-term storage and disposal of the nation’s radioactive waste.

Just a few years later it was a problem that would catch his eye.

“My career programme is characterised by going from engineering into large projects and programmes, and leading endeavours to try and deliver big and difficult stuff,” says John.

Since 2016, his ‘big and difficult stuff’ has been at RWM, where he initially joined as science and technology director but is now programme director with full responsibility for the delivery of the geological disposal facility.

When John joined RWM, which is part of the Nuclear Decommissioning Authority, it had about 110 staff and an annual budget of approximately £24m. This year, the organisation will have closer to 220 people and its budget will be more than £60m.

Its growth in the last couple of years underlines the support for the GDF programme from the NDA and government.

John has played a key role in transforming RWM, which already manages and handles radioactive waste for clients, to an organisation that is better suited to delivering the long-term goal of a GDF.

“I spent most of 2018 recruiting people and bringing in new digital systems and we are transforming RWM's ability to run significant programmes. My job is to conduct the overall GDF orchestra to try and deliver the project that we're heavily invested in.”

Put bluntly, it’s all on him.

“I fully feel a weight of national expectations that we need to come up with something in so we can move forward. The pile of waste is growing larger year by year.”

And, while RWM keeps a close watch on other technologies and options, John calls the GDF the ‘jewel in the crown’ of how we can responsibly tackle the problem.

John cites the report by the UK Royal Commission on the Environment in 1976, led by Sir Brian Flowers, which drew attention to the problem of radioactive waste, and the need to find a solution.

It wasn’t until 2006 that the government’s Committee on Radioactive Waste Management (CoRWM) published a report concluding that deep geological disposal was the only viable technology that could be pursued and delivered.

It would be another 10 years before John started at RWM, and he is undaunted by the challenge ahead.

“I've spent my entire career in public service, initially in the armed forces and now with RWM, and I genuinely see this as a programme that the nation needs. We look back on the Victorians, and they left us with many benefits, like sewage, water and railway systems.”

John continues: “Simply leaving an expensive pile of radioactive waste and saying to future generations, ‘well, you guys get on and deal with it,’ is not responsible.

“One of my strongest motivations for wanting to do this is that I think we can solve a problem that is then taken off the shoulders of future generations.”

In common with many other major public infrastructure programmes, the GDF project will measure its progress in decades, rather than years.

The key, says John, is breaking it down into short-term goals for his teams delivering the project so that they can develop a sense of urgency but also reap tangible rewards along the way.

“We often use the analogy about climbing Everest. You look at the top of the mountain and it seems impossible. But by the time you've broken it down into seven camps, people can see themselves getting there.”

One of those goals for the coming year will be the setting up of community partnerships, which is the first step to finding a permanent location for the GDF.

RWM accepts that solving the long-term problem of storing radioactive waste isn’t something that the public at large is particularly engaged with.

Rather than trying to generate a national debate or spending large amounts on advertising, they are working instead at local and regional levels, to educate and engage with communities about what the GDF is, and what it would involve.

Some of those communities may then decide that they are interested hosting the GDF. It is an entirely voluntary process.

“We only want communities who really want to do the programme. We don't want spend a lot of money on a site, but then has no community support.

“The reasons why they might want to do it range from, altruistically, it's a national need and we need a facility; to it can provide local jobs, and the initial investment benefits that they will get. We intend on making sure that a community is entirely comfortable with why it might want to engage with the programme.”

Educating communities about the GDF will be crucial and, while there may be difficult questions or pockets of opposition, it is a task that RWM see as absolutely fundamental to its purpose.

“I think safety is an absolute bedrock. You have to be able to demonstrate to communities that the facility will be safe. Safe during construction, operation, short-term and long-term.  Safe for tens of thousands of years,” says John.

“It just takes time to answer people's questions, and we’ll allow them to digest the answers at their own pace too. We’ll be giving them information that will range from very simple to very complex. We embrace this and it is not, in any way, an inconvenience.”

John is an executive director and sits on the RWM board. Even so, he is still a Prospect member.

“As a serviceman, I was subjected to the Armed Forces Act, and you were not allowed to join a union. It was probably professional curiosity that when I left, I said to myself that I should join one and find out what a union could offer.

“I’ve found it to be a really positive experience. I enjoyed learning about what Prospect does and, specifically, what it does for our staff here. I think it's good to have some of the senior members of the company engaged with the union.”

His membership now is part of “a general commitment to help Prospect help our people as best as they can.”

“We've got a lot of very bright, young people who have joined us over the last couple of years. Some of them could spend their whole career working on this programme in a very positive way.

“But breaking out from the theoretical, and getting into real communities, looking at some sites and walking the grounds, will really reinvigorate the programme.”