Prospect reps, members and employers at Devonport dockyard in Plymouth are doing their bit to ‘inspire and raise awareness on environmental issues and encourage best practice through good example.’ 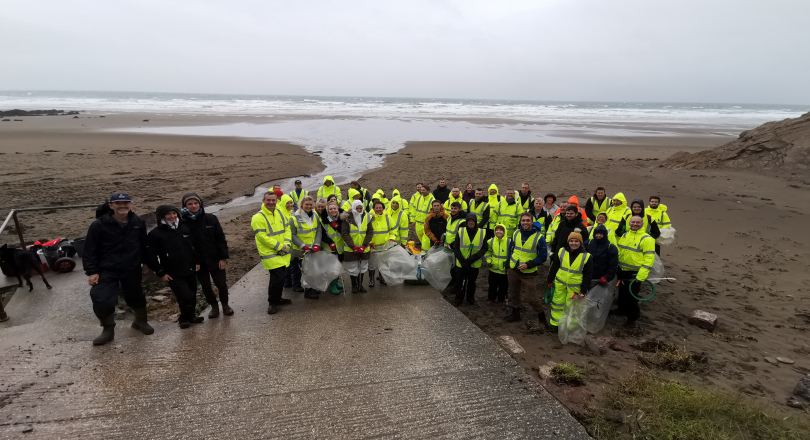 Dockyard employees from Babcock, the Ministry of Defence and Interserve teamed up with local group, Rame Peninsula Beach Care, and the Environment Agency’s plastics team.

Their latest effort was a beach clean at Tregantle Beach at Whitsand Bay. The 50 volunteers collected around 100 kilos of litter and filled 30 bags by literally sweeping the beach with dustpans and brushes.

Much of this was microplastics, small pieces of plastic less than 5mm in size. The plastics were sorted and sifted by a machine that was developed by Rob Arnold of Rame Peninsula Beach Care.

The event, the fourth beach clean the group has done, was organised by the environmental working group, which was created and is led by Prospect. The joint chairs are Tracey Rhodes and Richard Cooper.

Tracey said: “Since we started our beach cleans in 2016 the number of volunteers has steadily increased, which is fantastic.

“Beach cleaning serves more than one purpose. Obviously, there is the cleaning up of litter and unnatural debris. But raising awareness of the issues facing our wildlife and changing behaviours are also key.

“It was fantastic to team up with one of our local environmental groups, Rame Peninsula Beach Care, who do so much.

“We have built up great relationships with Rame and the Environment Agency through the World Environment Day events we hold each June.

“Activities such as these are only possible because of the environmental sustainability agreement, re-signed by the unions, Babcock, MoD, Interserve and Serco earlier this year – and the environment rep training provided by Prospect.

Christopher Warn, MOD’s head of health and safety, security and assurance, based at Devonport, said: “This joint Babcock and Ministry of Defence beach clean has been driven by employees who are passionate about the environment.

“Initiatives of this nature are fully supported by the leadership teams on site, who are equally enthusiastic about seeing continuous improvements in this vital area of business.”

How you can help

Everyone can do their bit by not flushing plastic or wipes, attending an event like a beach clean or simply litter picking when the opportunity presents itself.

Prevention is always the best option, so please consider using durable alternatives to plastic. Here are a few ideas: