Mark Bushell, curator of invertebrates at Bristol Zoo, left a career in the pub trade to follow his lifelong passion for natural history. He has since had an insect named after him and built a Prospect branch from scratch! Boc Ly reports 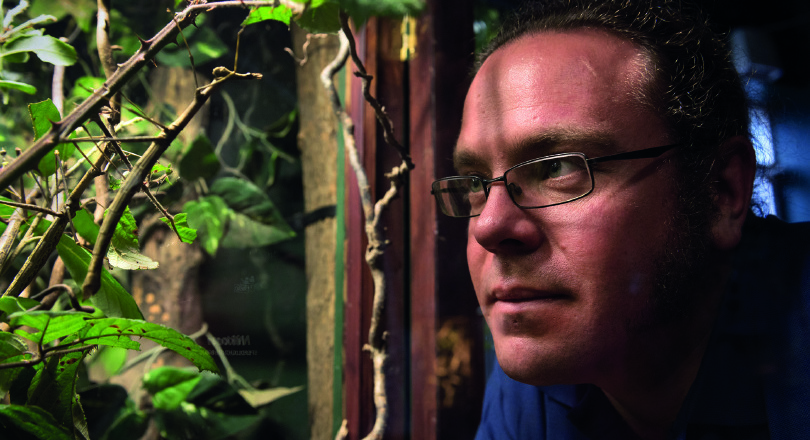 “From about the age of four or five I’ve always been into natural history, in particular insects, bugs and spiders,” says Mark Bushell, who grew up idolising David Attenborough.

It was, he admits, a strange career path that saw him spend 10 years in the pub trade before he successfully applied for his current role as curator of invertebrates at Bristol Zoo Gardens.

“I would save up money to travel to places like Malaysia, Philippines and the Caribbean for field work and research in the wild. It was all off my own bat, mainly with my dad. Never with an organisation, always just personal research,” he says.

An early highlight of his DIY research trips occurred around the turn of the millennium in Borneo.

“We found a species of stick insect that we didn’t recognise. But we only found males. After about four hours of searching I found a mating pair. We took lots of pictures and some specimens.

“I didn’t think too much more of it. A year after we got back, it was formally described as a new species and my surname was used for its species name: Mnesilochus bushelli.”

Mark explains that there’s no real incentive to discover stick insects because they don’t have an economic value.

Soon though, it would be time for Mark to leave the amateur days behind him.

“A job opportunity as a curator came up at Bristol Zoo in 2010 and, luckily enough, I landed the position.”

While a typical curator would generally need formal qualifications, Mark had 30 years’ experience of working with animals in the wild.

“They decided it would be easier for me to learn zoo management while I was working. You can’t build up the experience that I have in a short period of time.”

As well as overseeing the collection at Bristol Zoo, he also chairs a few specialist groups on invertebrates on a national and international level.

His passion for the natural world remains undimmed by the day-to-day mundanities of your job also being your hobby. “People come to the zoo and they see various species of invertebrates. My main aim is to get people more enthusiastic about them and change their perspective, then maybe go home and make lifestyle changes.”

As well as discovering a new species of insect, Mark also founded Prospect’s Bristol Zoo branch. It started with a conversation with his wife, a long-time union member.

“One night in 2015, we were talking about work and she was having a fairly rough time. She said the union reps were really helping her out.

“There was nothing wrong at Bristol Zoo but she said you never know when it is needed. Think of it like job insurance.

“I used a union calculator: you pop in your details about what you do and it came up with Prospect as the recommended union, so I joined.”

There had never really been an attempt to unionise before at Bristol Zoo, says Mark. In fact, unions were seen as trouble makers. A conversation with Prospect’s local full-time organiser, Chris Perry, put his mind at ease.

“Chris told me we try to be surgical in negotiations and talk about things before they hit that messy point, which really appealed to me.”

Mark remained the only member for a while and wasn’t actively recruiting until a colleague ran into difficulties.

“An issue occurred at work and I just said to someone that it might be an opportunity to join a union, and they said, ‘Oh do you know anyone who is in one?’ I took that as my chance to explain.

The HR department at the zoo has been quite encouraging and a good working relationship has been formed.

“A member brings up an issue and says: ‘This is coming up, can you advise, or can you sort it out before it becomes an issue?’  That’s been invaluable. We’ve dodged a few bullets that would have ended up in grievances. I hope people see that it has been a force for good.”