Delegates at Prospect’s annual conference for BT reps in Nottingham on 17 May backed two emergency motions setting out the way Prospect should fight the forthcoming campaign against job losses. 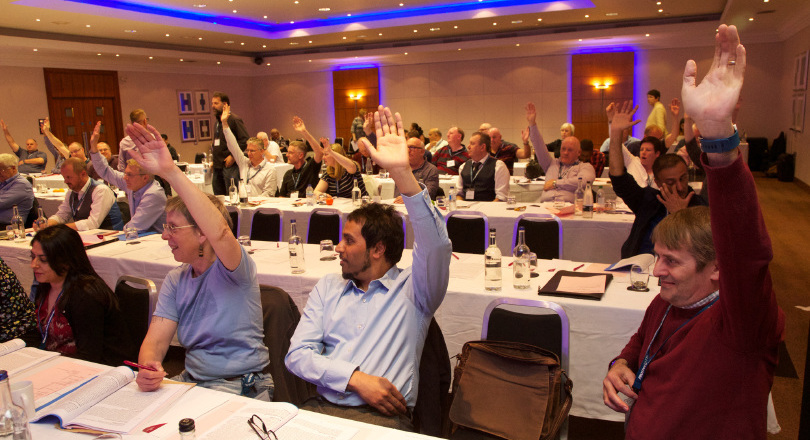 The first motion was moved by Tim Handley (TSO IRC), who described the job losses as “BT’s Brexit”. He suggested that where the nation had gambled away its economy for blue passports, BT was sacrificing 13,000 jobs to save those at the top.

The successful motion called on the committee to gather evidence of the impact of unworkable job cuts and use that to push back on BT’s “completely unrealistic plans”.

It also advocated keeping open “the option of industrial action, both generally and in specific high profile areas”.

The committee was directed to press the company to:

Izzy Lane (BT Adastral Park B), moved the second emergency motion, calling on the BT committee to push to keep job losses to a minimum. It said displaced people must be offered suitable alternative roles, with individuals not intimidated into accepting any so-called “voluntary” leavers’ package.

Lane stressed that proper retraining must be offered and alternative offers should be at the same grade and in a suitable location.

In debate on both motions, Andy Bailey (BT Mid Yorkshire) said he was tired of BT treating the union with contempt. “It’s time for action, because if we don’t act now there might not be anyone left to take action in the future.”

John Borowski (BT Brentwood) appealed for guidance on how to engage members in action.

Summing up, Angus Wheeler-Rowe (BT committee) said that the union’s aim should be to achieve zero compulsory redundancies and ensure survivors were not expected to take on any extra work.

While accepting a need for change, “this must be controlled, considered and careful. And they have got to get us on board”.

Action at times spoke louder than words and “we are going to have to unite in this campaign”.