Prospect reps in BT gear up to resist 13,000 job losses

Prospect reps in BT gear up to resist 13,000 job losses

Prospect will challenge the scale of the 13,000 job cuts proposed by BT, and it will not be “business as usual”, national secretary Philippa Childs told delegates at the union’s annual conference for BT reps in Nottingham on 17 May. 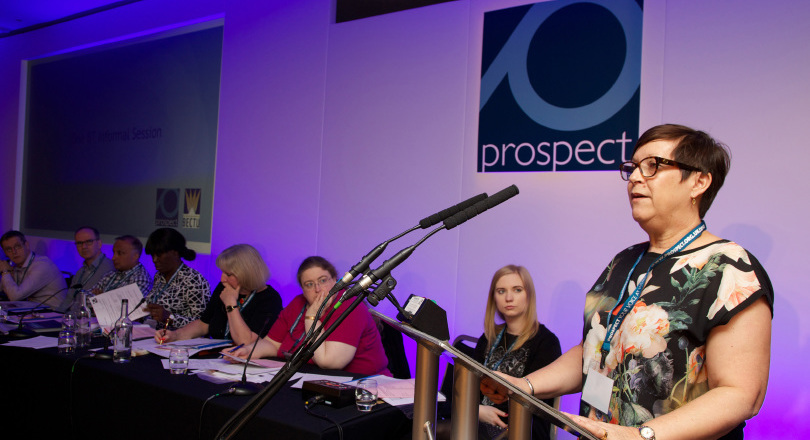 “We were all shocked, stunned, dismayed, and angry at the chief executive’s announcement a week ago, and not just at the number of jobs involved but also at the tone,” she said.

“I have been a trade union official for something like 28 years and I have never seen such a callous announcement. The lack of empathy for the people who would naturally be very upset and concerned for their futures is astounding.”

She was referring to the CEO’s message to staff which described the changes as “bittersweet” and focused on the loss of buildings as well as jobs.

Childs said that because of the unexpected scale of job losses, Prospect received widespread positive media coverage, but much more needed to happen.

After earlier confusion, the union had now been told that the cuts would be over three years and that while most cuts would fall on managers and professionals, some team members would also be affected.

“We need to campaign,” she stressed. “I don’t think we should be operating on a business as usual basis.

“We must challenge the scale of these job cuts. We must push back on any suggestions that people should be forced out of the door. We must protect those who remain behind in terms of pressure of the work they will face. We must be sure if there are any redundancies it means that this work will stop within BT.”

Childs said BT representatives would play a crucial role, urging them to be “our eyes and ears” and to talk to members about how they could support the campaign.

In the first half of May alone, 150 new people had joined Prospect in BT. “We must keep that going, this year, next year and the years that follow.”

Childs replied that Prospect had sent a briefing to the Labour Party. Shadow business secretary Rebecca Long-Bailey had issued a statement. Prospect would also engage with all MPs with large BT sites in their constituencies.

Mark Kent (TSO industrial relations committee) said the company seemed confused about whether it was a software house, a 1970s -style network operator or a TV company. He felt that “in every decision BT makes it seems to be unsure as to which direction we are going in”.

Tim Handley (TSO IRC and BT Stoke-on-Trent) highlighted the lack of clarity in the reorganisation policy about compulsory redundancies.

Andy Harding (BT Thames & Wey Valley) raised concerns about rumours that the BT transition centre was to be removed.

Childs said she would be seeking clarity from BT on the difference between voluntary leavers' packages and voluntary redundancies. The laws around compulsory redundancies were very strict, including the obligation to look at recruitment freezes, redeployment, and so on.

She was also meeting BT about the transition centre. “I share your anxiety about its loss in current form; on the whole it has done a good job in terms of redeploying people,” she said.

Mike Cassidy (BT Newcastle and Middlesbrough) urged delegates to recruit new members and “get as many people as we can into the lifeboat.”

Anthony Foster (BT Milton Keynes) raised fears about people being pushed out for “some other substantive reason” after time in the transition centre, when they were not being dismissed for attendance or disciplinary reasons.

Childs said in the past Prospect had normally helped affected members reach a satisfactory settlement, and where not, had supported them at an employment tribunal.

She stressed: “We need to stamp on any suggestion of people leaving the company without BT paying for it. We will defend our members who face that challenge.”

Earlier BT committee and conference chair Martin Aylett welcomed delegates by saying that many were using the word “carnage” to describe the scale of the job losses, which in his view was “entirely appropriate”.

He said Prospect would expect BT to consult early and properly on the changes ahead, and the negotiated reorganisation policy should help to ensure this.

Aylett praised the role played by Prospect and its reps in the face of concerted attacks on terms and conditions, including pay, pensions and reorganisations, over the previous year.

“We provide a really good level of support to members in BT and that’s not only provided by the officials, BT committee or industrial relations committees. It’s provided by all our reps and by each other.”

He urged them to engage with members over the job losses.

Later Chris Amos, BT’s head of employee relations, and Penny Brown, senior employee relations manager, addressed delegates and took questions about the changes ahead. Amos said he expected the business to consult with Prospect in a timely way.