Prospect has done “excellent work” to reduce the company’s equal pay and gender pay gap through equal pay reviews and analysis of deals, the union’s BT conference in Nottingham on 17 May was told. 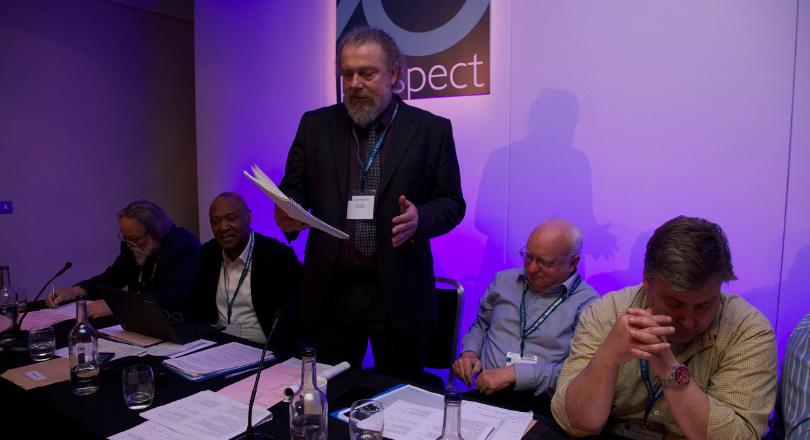 Kevin Sproule (BT Northern Ireland) moved a successful motion welcoming this work. The motion also called on the BT committee to continue seeking to protect and enhance transparency around pay.

The committee should oppose any moves to remove or reduce visibility of pay gaps by gender, ethnicity or other key defined equality markers, the motion said. It highlighted the much bigger gender pay gap within the EE part of the business, noting “there is no union recognition in EE or collective bargaining for pay”.

The committee must seek clarity around new end-of-year bonuses and ensure managers are not left worse off than in the past, conference decided.

Mover James Hughes (BT South Wales) said young members in his workplace were alarmed that even with a “good” performance rating their bonus may only be 0.4%.

Steve Dickson (BT committee) said while Prospect had suggested better ways of spending the bonus pot, BT did not consult on this element, and it seemed the company “would rather spend the money on shareholders”.

The difficulty of progessing beyond the mid point of pay ranges was raised by Keith Stephens (BT London Southern), who said this left those with long service at a disadvantage. His motion instructing the BT committee to tackle this while continuing to address equal pay.

But delegates voted in favour.

Managers are being promoted, only to find they are earning less than before. Some line managers also earn less than their team members, conference heard.

Graham Skipp (BT London Central East and South) asked delegates to agree the “reference back” of a 2017 motion calling for suitable differentials between grades, as it was unclear what Prospect had done about it.

Peter Pearson (BT committee) insisted that Prospect had taken every opportunity to raise this with BT, including in Openreach.

“We have not made the progress we would have liked but we have seen marginal improvements,” he said. The January pay awards, for example, had favoured those at the lower end of the scales.

Andy Bailey (BT Mid-Yorkshire) said he knew of cases of people who did not want to be promoted because they feared they would never get a pay rise again.

National secretary Philippa Childs said Prospect raised this issue in every pay meeting with the company and was extremely exercised about it.

Acknowledging the committee’s efforts, Skipp withdrew his reference back request.

Delegates supported a call for the starting salaries of people promoted into management roles in the capital to include London Weighting, so they are not worse off than those they manage.

Skipp also won backing for a motion seeking abolition of BT’s cap on pay rises (currently £5,000) and pushing for a rise for all newly promoted managers.

Delegates backed Mark Steele (BT South Yorkshire) in seeking safeguards that after their recent 3% pay rise, CWU members would not earn more than their line managers in lower band 1.

But conference rejected criticism of the Prospect BT committee for negotiating a lower percentage rise for managers and professionals than the 3% awarded to CWU team members.

Proposing a reference back, Graham Skipp said many managers had complained to him and some members had resigned.

But national secretary Philippa Childs said BT had exploited the lack of a single union table. “That means different pay dates and separate negotiations. It is in inevitable that after whoever goes first, the person who goes second will try and get a better deal. In normal circumstances we go second.”

In January members had accepted the offer and while some resignations were always inevitable, recruitment had in fact been very good.