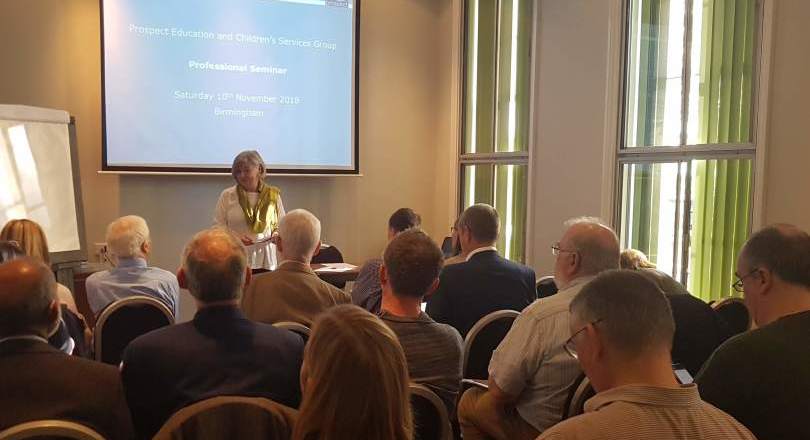 The all-day event, attended by around 20 delegates, featured two keynote speakers, group discussions and a session on pensions.

The professor, who is working with schools in the West Midlands in raising standards and whose previous roles included director of curriculum at the Qualifications and Curriculum Authority, gave an often humorous and philosophical talk that began by looking at the very purpose of education, stressing the importance of pedagogy.

Professor Waters asked: “How many people could look back on their schooling and could say that it gave me a voice, or it helped me to believe that I could make a positive difference, or it gave me skills and knowledge to manage my own life?

“Or, how many people leave school and just think that school made them ready for taking exams?”

One of his slides highlighted several topical news stories, such as the shredding of the Banksy artwork when it was sold at auction, and how they could all be ‘triggers’ for science and learning to excite pupils.

This quixotic approach was balanced by some detailed analysis of the systematic challenges and tensions within the education system between various parties, such as that between policy-makers and headteachers; headteachers and teachers; and even between teachers and pupils.

Education, the Professor said, should be more about encouraging people to find their own way, rather than making it feel like jumping through consecutive hoops – whether you were a pupil, teacher or inspector. He lamented the lack of trust and innovation in the present system.

He ended, however, on an uplifting note, sharing some outstanding examples of artwork and poetry from some of the young people that he had come across.

After lunch the afternoon session began with the second keynote speaker, Laurence Findlay, director of education and children’s services at Aberdeenshire Council.

His presentation was a case study in a national effort to improve education standards, which was prompted by an Organisation for Economic Co-operation and Development report into Scottish education. The OECD report raised concerns about a range of challenges including falling achievement in maths and assessment and low performing schools.

This led to the “National Improvement framework for Scottish Education” and the creation of regional improvement collaboratives.

Findlay spoke in detail about his collaborative, the Northern Alliance, which was a partnership between eight local authorities in the north of Scotland.

“We were all encouraged to work together as part of the collaborative and it was a whole new way of thinking,” he said.

“It was about reducing inconsistencies in the system. Giving advice at a sector level and subject level, providing a practical framework to share best practice and bring together local authority and national government resources.”

Their work, he said, was focused on empowering and recruiting teachers, raising literacy and numeracy standards and improving opportunities for the poorest young people in their areas.

The alliance is trialing various programmes in these areas with a £400,000 grant from the Scottish government. For example, an e-learning concept uses technology to allow pupils to learn, and teachers to train, remotely which could help the challenges of a dispersed and at times remote populations.

After ending his talk, Findlay also took part in a Q&A with delegates that touched upon some of the differences between the English and Scottish education systems.

The seminar ended with a session lead by Stewart Mott, Prospect pensions officer, who talked about the “paradoxical” world of public sector pensions and looked in detail at the teachers and local government pension schemes.

Reflecting on the day’s events, Steve Thomas, Prospect national secretary, said: "As professionals working in education our members have a passion for learning and improvement and it was great to see that also reflected in Mick and Laurence’s fascinating presentations as well as over lunch in networking. We are already making plans to follow this event up in 2019 and hope to see even more members in attendance”

Previously for union week, the Prospect ECS group held a special Facebook Live event, where Jill De Paolis and Claire Dent, Prospect negotiations executive, discussed some of the pressing issues in the sector and answered viewers’ questions. Watch the event.