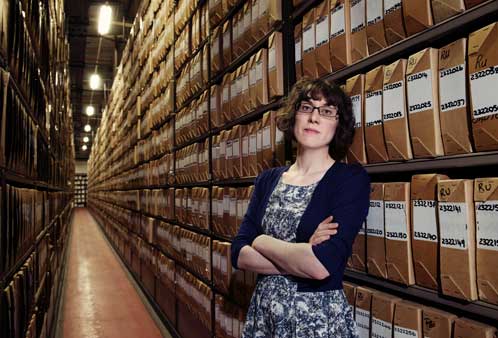 It's intricate - looking at small details and reading through technical documents. Growing up I never had a clear idea of what job I wanted to do and I didn't really expect to find something I would enjoy. But, given that I get paid for it, I don't think I could find anything that suits me better.

In 2014 Eleanor was Branch Chair for Prospect at the IPO; the branch had successfully campaigned to close an unequal pay gap in 2013, winning an out of court settlement of 6 equal pay cases that resulted in pay rises of up to £8000 for 185 individuals.

'I did a mechanical engineering degree in Birmingham and when I graduated I saw this job - it looked like something I would like to do. The IPO sent us on a three-month Intellectual Property course in Manchester, then we came back to Newport to begin training. It normally takes between 6 and 9 years to become a Senior Patent Examiner.

Mechanical Engineering is heavily male dominated and I think that has to do with cultural expectations. Going to an all girls schools insulated me from that as there was no split where the boys were good at science and the girls were good at, you know, squishy things. Obviously all the people who were good at science were girls. I didn't really feel that there was any cultural expectation on me not to do science and technology.

Studying with men at University was a big difference for me. I didn't particularly feel like I was treated any differently as a woman but its hard to compare because having gone to an all girls school the contrast would have been pretty great anyway.

I don't think being a woman in the minority made a massive difference at work either but I think it's certainly the case that when there are only around 40 women among over 200 men you do remember the women. They stand out more and so might be more likely to be picked for something. That can be a good and a bad thing.

My job is broadly to search and examine UK patent applications. A typical day for me involves assessing what is disclosed by technical patent documents, and considering whether the wording used in applications meets legal requirements. When somebody has invented something I have to establish what it is they think they have invented and then see if it already exists. It can take up to 5 years for a Patent to be granted and it can last up to 20 years.

I think the reason we start off with so few women is because there aren't many with science and technology backgrounds, so if you are taking from that pool you are not going to get large numbers of women coming in.

Generally speaking we still have a society where men often earn more than their female partner. A man who is a primary breadwinner may feel that he needs to stay where he is and stick it out. Maybe women feel more freedom to take a risk, that they have more choices of branching out and doing something different, and there are good opportunities to move into other things. That could explain why the proportion of female examiners reduces over time.

Women who come in at the bottom do seem to leave and they are not all leaving to have kids. Is it the atmosphere? The type of work? I don't know. I'm not sure why it would be particularly less appealing to women than men.

My job is good for men and women with family commitments and it's a shame we don't get more women. There are good policies in place such as flexi time and leave, home working etc. In terms of fitting in your lifestyle, its perfect, I'm able to start work pretty much whenever I want to. It is striking that we are a public sector employer with really good family friendly policies and yet we don't seem to hold onto women in these sorts of roles.

There are only 250 of us in the country doing this job, its one of those jobs that people think doesn't really exist. Most 6 year olds don't say 'I want to be a patent examiner when I grow up' because they wouldn't know what a patent examiner was. You've got to know it exists in order to want to do it

As far as I know the recruitment process doesn't specifically encourage women into patent examining, and apart from heavily promoting the family friendly policies I'm not really sure how it could.

I've just come out of bringing an equal pay case against the IPO so it would be a bit strange for me to sit here and say 'I don't feel I've been discriminated against' For whatever reasons women tend to have shorter career plans so we often end up with men clustering at the top and women clustering at the bottom of pay spans. The gap wasn't intentional, but given the different patterns in men and women's careers, it was almost inevitable.

Patent Examiners can be thought of as being professional pedants, It can feel like marking somebody else's work, except that that somebody else is an inventor. It's intricate - looking at small details and reading through technical documents. Growing up I never had a clear idea of what job I wanted to do and I didn't really expect to find something I would enjoy. But, given that I get paid for it, I don't think I could find anything that suits me better.

It is a strange job and it doesn't suit everyone, it involves a lot of time spent staring at the computer. It is a bit nerdy to be fair, you know, looking at a thousand different beams, or whatever, and trying to see which beam is most like the beam you have got. Working with the union adds variety for me.

Another thing I quite like is that you are working pretty much by yourself, day to day you are not reliant on someone else and no one else is reliant on you. There are times when it can be stressful, as it can be pretty relentless, but it doesn't tend to be in peaks and troughs. I really enjoy it and I see myself as one of those people in the job for 40 years.'

Women make up 16% of the workforce at the Intellectual Property Office.