Sara works as an air traffic control officer at London City Airport. Her employer, NATS (National Air Traffic Service), is the main air navigation service provider in the UK, covering 15 airports in the UK and Gibraltar. According to NATS the airspace above London and the south east is the most complex in the world. 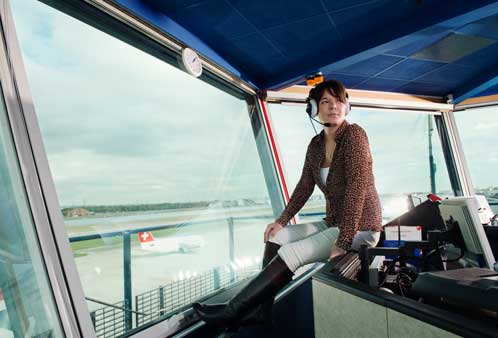 I love my job because of the team work. It’s one of those jobs you get so much pleasure from – when you’re plugged in and everything is moving the way you want it to and everybody is getting a good service. I take pride in the service I give. It’s an exciting job and I do love it.

“I worked as a prison officer at Wormwood Scrubs for eight years and it was wanting to leave that career rather than an interest in air traffic control per se that inspired a change. I was actually on the recruitment drive for the Prison Service when I saw the advert for an air traffic controller and had a moment where I thought ‘why not? I’ll give it a go’.

“It was quite a long process to get to the training stage. It’s very computer based now but when I did it you were assessed for a day in head office. You did psychometric tests, spatial awareness tests and a lot of physiological questioning. If you were successful you went through a three-stage interview with an air traffic controller and a psychologist as well as a computer-based reflex test. The weirdest question the psychologist asked was ‘do you like gossiping?’

“My first job as an air traffic controller was at Heathrow. I worked there for 9 months but I didn’t appreciate the environment so NATS gave me another go at it and sent me to City Airport. I love it here; at Heathrow you are dealing with huge volumes of traffic.

“We can’t work more than 2 hours at City Airport without a half an hour break. At Heathrow you have a break after only an hour and a half. You need to stay fully rested and calm throughout your entire shift, if you get overworked you can make a mistake. When it’s busy you really do feel ready for your break, you are holding a lot of information in your head and you need that release.

“Your brain is working in a certain way, you are thinking at least 5 minutes in advance: you have already thought about plan A but are also thinking about plans B, C and D if plan A doesn’t work. That’s what makes an air traffic controller, being able to think quickly about how you can get out of a scenario if things don’t go according to plan.

“We get a certain amount of information electronically but we also have to give physical reports – go out of the tower and see what type of rain is falling and how high the clouds are, what the visibility is and how far you can see. The pilots need that information before they start their engines up. It’s easy if it’s a gin clear day.

“There is a minimum of 2 of us in the tower at any one time and 4 on shift, no-one is allowed on the runway without the air traffic controller’s express permission. We are in communication with the pilots once they are on the final approach track to land and until they take off again.

“I’ve always had a pretty boisterous personality. Obviously working in a male prison for eight years toughened me up, but I’m not a shy person, put it that way. I’ve never particularly noticed that being a female in this job is detrimental in any way because it’s so related to the way you move aircraft, it’s not at all gender specific.

“The prison was obviously a very male dominated environment, but the camaraderie and teamwork meant you never really noticed any deficit or difference in being a woman. As an air traffic controller I notice it even less. I can go 4 hours into the shift before I even realise I’m the only female on duty. I wouldn’t say I feel I am in a very male dominated environment, in fact I probably dominate them!

“I can’t imagine working in a female environment, the only time I see that is on the television.

“I think this is a good job for a woman, but difficulties arise with shift-based work patterns and family commitments, Working full time would be very difficult if you had childcare responsibilities. Currently there are only 2 other females who work as operational controllers at City Airport, and 15 men.

“City Airport is shut at night and from noon Saturday through to Sunday lunchtime to reduce noise pollution for our neighbours. So the working hours are fairly sociable, but every week is different and it would be very difficult to juggle such a shift based career with childcare. Likewise, it would be difficult to keep an airport open without the shift patterns. I would say this job is not very family friendly but I wouldn’t have a clue how to remedy that.

“I love my job mostly because of the team work. It’s one of those jobs you get so much pleasure from, when you’re plugged in and everything is moving in the way you want it to and everybody is getting a good service out of you. I take pride in the service I give and of course getting to watch big planes out of the window; it’s an exciting job and I do love it.”

There are 2,500 air traffic controllers in the UK, of which a quarter are women.