In 2014 Beshlie had been working as a Marine Officer with the Marine Management Organisation since 2009. She was based at Plymouth Fisheries, the most diverse fishery in England. Beshlie had to check the incoming catch, measure them and ensure that the fishermen follow the EU's regulations for sustainable fishing. 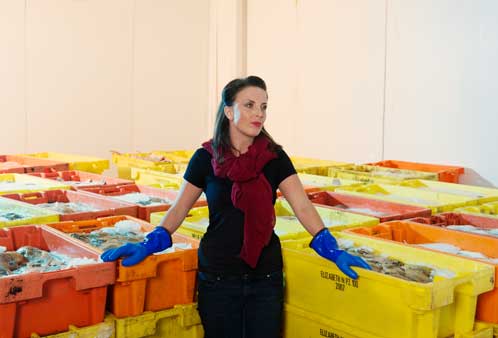 When I was about 12, I used to get up half an hour early before walking to school to take the litter off the beach, of my own free will. My mum thought I was a bit of a hippie, so she instilled good environmental and social values in me.

"My first ever job, when I was four years old, was taking crabs out of a fishing net for 20 pence per crab. I should have just carried on from that point really.

"When I was about 12 years old, I used to get up half an hour early before walking to school to take the litter off the beach, of my own free will. My mum thought I was insane. But she was probably a bit of a hippie, so she kind of instilled good environmental and social values in me.

"I knew that I wanted to work with fish. But it just took me a bit longer to figure out what exactly to do with my life. I went to university a bit later than others, at 24. Before that I ran a local fisherman's pub but decided that I wanted to do something a bit more environmental which had to do with the sea.

"When I was doing my MSc in sustainable environmental management I just kept my eye on the job market because the South West doesn't really have that many jobs, and I would have been a fool not to apply for anything that was going. So I applied for this job and got it.

"It's a man's job! It's a very masculine world out there. There are a lot of dead things and I can't imagine why it would appeal to women to be honest. Sometimes I think, "Why am I doing this?' People are often impressed when I tell them what I do, 'Wow, there's a girl doing that?' But it does raise a few eyebrows, because it is traditionally such a male environment.

"I think you do get treated differently when you're a woman. It's inevitable really. Some men want to protect you, others look at you like you're their sister and some think, 'It's a girl, what does she know?' There are certain things I can't do, but I happily ask my male colleagues or the fishermen to help me. For example, the boxes of fish are really heavy, so some of my male colleagues will lift them - I just can't do it. Or when you're on the boats it's easier for some of the taller guys to climb and lift things. But us women are good at things they are not. It balances itself out.

"I found it a bit overwhelming at first because it was so masculine. I wore lipstick to work, which I still do every day, but it caused some massive reactions in the beginning. People would say 'What's that on your face?' Some men found it intimidating, others found it something to laugh at. Now they've got used to it.

"I work all sorts of hours so it can be difficult to maintain relationships. If I get a call in the middle of the night about a report of illegal fishing I have to leave the house to check if the reports are true. Another change in my life is that I've stopped eating fish, which is a fairly big deal for someone who used to like to go fishing.

"No two days are ever the same, ever. I can attend meetings with businessmen in the morning then go the quayside in the afternoon, measuring fish. We also have to be really reactive – if we get a report of an offence happening I get in my car.

"I wouldn't change my job. If I went back and someone explained exactly what I'd be doing, I would have been like 'oh no, horrible'. But actually doing it is not as bad as you'd think. I would have made a choice not to, but it would have been the wrong choice.

"Everyone has to take me as I am; I am just stubborn and ignore them. It doesn't matter if I'm a boy or a girl, as long as I do my job properly."

Beshlie no longer works for the Marine Management Organisation

There are currently 334 people working for the MMO; 11 women hold the position of Marine Officer.