Kate is an operational analyst for the Defence Science and Technology Laboratory (Dstl) in Portsmouth. Dstl works towards maximising the impact of science and technology for the UK's defence and security. Kate has a Master of Science degree and has worked for Dstl since 2003. 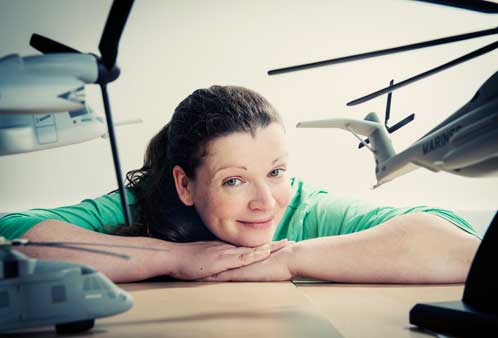 My job is looking at questions like what does the Ministry of Defence need in the future and what sort of challenges are going to come up that science and technology might help meet? We’ve got to look quite far ahead, anywhere between 5 and 20 years and think – what’s coming up?

“Science was an important part of my upbringing. Both my parents were scientists. My mother did a PhD in chemistry then worked as a research scientist before she had me, but of course back then when she got pregnant she had to quit.

“When I started university I tried to do English literature, but I found it wasn't for me since I am much more mathematical. After my MSc, which was in statistics, I did a year in the pharmaceutical industry. But I felt I didn’t want to do that forever, and that there was probably something more interesting out there.

“My job here is looking at questions like what does the Ministry of Defence need in the future and what sort of challenges are going to come up that science and technology might help meet. We've got to look quite far ahead, anywhere between 5 and 20 years ahead, and think what's coming up. We also look at current operations and how we can best support them using science and technology.

“When I joined Dstl I went into the Naval area first; that was definitely male dominated. It's still male dominated but there have been a lot more female graduates coming in for the last 10 years, since I started. Until 2 years ago we had a female chief executive, which was good because that kind of made it feel like there was a culture shift.

“I suppose I was aware that I was entering a male dominated industry to an extent, because I knew I was going to be working in a military type environment. Although it's not the military, you're still working with the military and that kind of culture. But I’ve never been teased or treated differently because I’m a woman.

“What I've found hardest about this job was working in a military culture. I had never had any experience of that before joining Dstl; I don’t have any family in the military. It's a very different culture, very focused and straightforward. That took quite a while to adapt to and learn how to interact with the military men, since we have some military guys embedded here.

“The idea of working with the military might scare some women off. It's quite daunting. It didn’t really go through my head at the time but I think I can see why it might to other women. But then you come and work here and actually people are just interested and want to do a good job. As long as you respect what the military is experiencing, it works quite well.

“I was quite shy and easily intimidated when I first started. But working in this environment has helped me and given me a different perspective. If I’m in a meeting with five military officers and they're not listening, I simply have to find a way to get through to them.

“Now that I’m expecting my first child I feel it’s very important to be a role model. My husband and I will be sharing the care and both of us can work for Dstl flexibly or part time. I want to show that it’s not just the women who have to manage both childcare and a job, but that it's shared. And that's possible here.”