Jennifer is a systems engineer for EDF Energy. She has worked at Hunterston B nuclear power station in Scotland since 2010. EDF Energy is one of the UK's largest suppliers of gas and electricity; they own and operate eight nuclear power plants that produce a combined total of almost 9,000 megawatts of power. 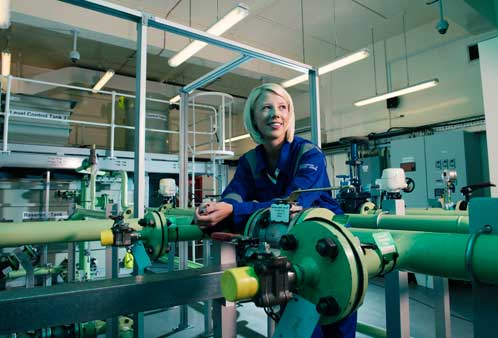 When I was at school I didn’t really know what I wanted to do, so I found myself picking subjects that I enjoyed. My favourites were maths and physics and I happened to be really good at them.

“When I was at school I didn’t really know what I wanted to do, so I found myself picking subjects that I enjoyed. My favorites were maths and physics and I happened to be really good at them.

“My dad is a mechanical engineer. He always seemed to have an interesting job and that inspired me when I was growing up. I initially chose accountancy at university because I wanted to do something different, but it turned out I was simply naturally suited to engineering.  After my degree I did a postgraduate course and studied sustainable engineering to gain my masters in science.

“I guess I was aware that it was mostly men working in engineering, but that wasn’t something that bothered me. I don’t think about it, I just think about myself as one of the team. It was only different when I was the new person, but then a new face always stands out and I don’t think gender really matters. More females are getting into engineering now and I’d really encourage them to do so, it’s a very interesting career.

“It’s hard to describe a normal day but that’s what I like about the role. I look after the long-term health of my plant areas but I do spend time in my PPE uniform, which gives me a good mix of office and plant-based engineering work. You might have in your mind what you're going to be doing, but then something emergent happens and it refocuses your attention.

“The most challenging part of my job is probably to prioritise what I’m working on because a lot of the time we have different work areas and demands. It’s knowing what your focus should be and trying to balance that.

“You always have to be spatially aware of what’s going on around you on site. You have to know what jobs are being carried out and have a general knowledge of what’s going on. There was one thing I never used to do before I started here and that was holding handrails on the stairs because of germs. Now I automatically hold on and it’s become second nature as we have to do this at work as a safety measure.

“Maybe the reason for there not being so many females in technical roles in the industry is because of subject choices at school. I think girls aren’t naturally as interested in sciences and maths but that is definitely changing.

“When I come to work, I come dressed quite feminine, but when I have my PPE uniform on, which is unisex, I feel a bit like I’m in boy’s clothes! I'm quite a girly person so it’s important to me to keep my femininity, but I don’t really think it matters too much what I’m wearing at work, I’m here to do a job.”