When our Pioneers calendar was produced, Lindsay was a senior research scientist at the National Physical Laboratory. She had worked there since 1997, and her job was to measure the thermophysical properties of materials. She was also a STEMNET ambassador to inspire young people in science. 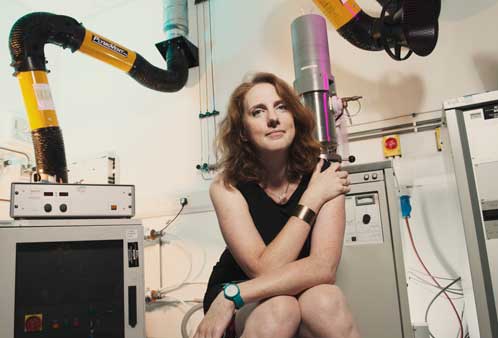 Being a confident science communicator is crucial in order to get funding for projects. I joke with colleagues that if you can explain your science to children of different ages, you’re likely to be better equipped to explain it to policymakers. Scientists need to demystify their work and present themselves as human.

“I was a very curious child, always asking questions and quite technically literate. My dad and I used to cycle and repair our bikes together. My grandfather was a lorry driver who did his own mechanical work, and I had an adoptive grandfather who loved to play Lego with me. Nothing was ever presented as a girl’s or a boy’s toy; it was always just whatever I was interested in.

“I really enjoyed school and it was difficult for me to choose what to specialise in with A-Levels. I particularly enjoyed where chemistry and physics cross, where small changes in atomic structure affect the entire way a material behaves. That led me to a degree in materials science.

“What appeals to me about my job is the broad scope of it. Today I might be looking at how to successfully measure graphite, which is a solid, or I might look at a nickel alloy in the liquid, or at a ceramic mould that you pour the nickel alloy into. I like to be able to look at the entire story of how materials interact within manufacturing.

“I also love the variety of customers. I work with people who make jet engines for various forms of aircraft, and others who are trying to bring on the development of nuclear fusion. Then there are customers who want to measure the properties of brass used in bit mouthpieces for horses, to know if their material is better than a competitor’s in cold weather. It’s important to me that there is a need for these precise measurements. I see the greater good in it: it’s not just that I’m helping a company save money, there is also a benefit to society in terms of advancements like reducing C02 emissions.

“Being a confident science communicator is crucial in order to get funding for our projects. I joke with my colleagues that if you can explain your science to children of different ages, you’re likely to be better equipped to explain it to policy makers. Scientists need to demystify their work and present themselves as human.

“As vice president of Prospect at NPL, I represent members for all sorts of issues, including those related to women. Most of my research colleagues are men, but I’m fairly lucky; there are a number of women around in other functions at NPL. My male colleagues go out of their way to make sure we are treated as equals and experts in our field. However some women in the union don’t see other female colleagues during their working week, and they can spend a lot of their time wondering ‘is that sexist, or is that just me?’ They don’t have the sanity check they’d have with other women around. It’s very difficult to explain to male colleagues when things aren’t overt sexism, when they’re implicit and culturally bound.

“In my entire time at NPL, I have only known of one woman at the most senior level as a scientist. There are plenty of women in my division; they just don’t get the top jobs in the industry. Wanting children can impact the progress they’ve made in their careers, so we need to make sure that men have the opportunity for as much parental leave. Even then, there are still many women who don’t have families and who aren’t progressing like they should. Until the whole community realises that there is a problem, nothing will change. I’m not sure that many organisations are bold enough to take that leadership role, to admit that we may live in a patriarchal society, but that you can strip down and change the internal culture of a company.

“Sometimes there is actually too much emphasis on trying to make science appealing for girls, which makes me itch. Why can’t we just make it interesting for people in general? One example was a campaign from the EU showing young women prancing around, dealing with cosmetics. I have no problem with that industry, but to show it as the only thing women are interested in is ridiculous. Thankfully it was treated with derision in the wider scientific community. As a scientist and a human being, I’m interested in the world – not just in the bits that apply to me.

“There might not always be an example ahead of you in terms of women in your organisation, but the more you progress in your career, the more you become confident in your work and know that you are the expert in your field.”

Lindsay now works as a negotiations executive with Prospect.

Women account for just over one in 10 of all UK employees in science, engineering and technology (SET) occupations. The “leaky pipeline” analogy is often used to describe the loss of women at consecutive career stages in SET, despite the fact that more women than ever are studying sciences at A-Levels.