Get involved in the campaign for workers' rights

Prospect at Work is your campaign so get the message out. Let's make sure members know what Prospect does and the value and benefits of organising together to secure better rights at work.

But don't stop there, work to build Prospect and the union movement. Speak to non-members in your workplace. Share the message with friends, family, and others on social media.

What you can do to spread the word: 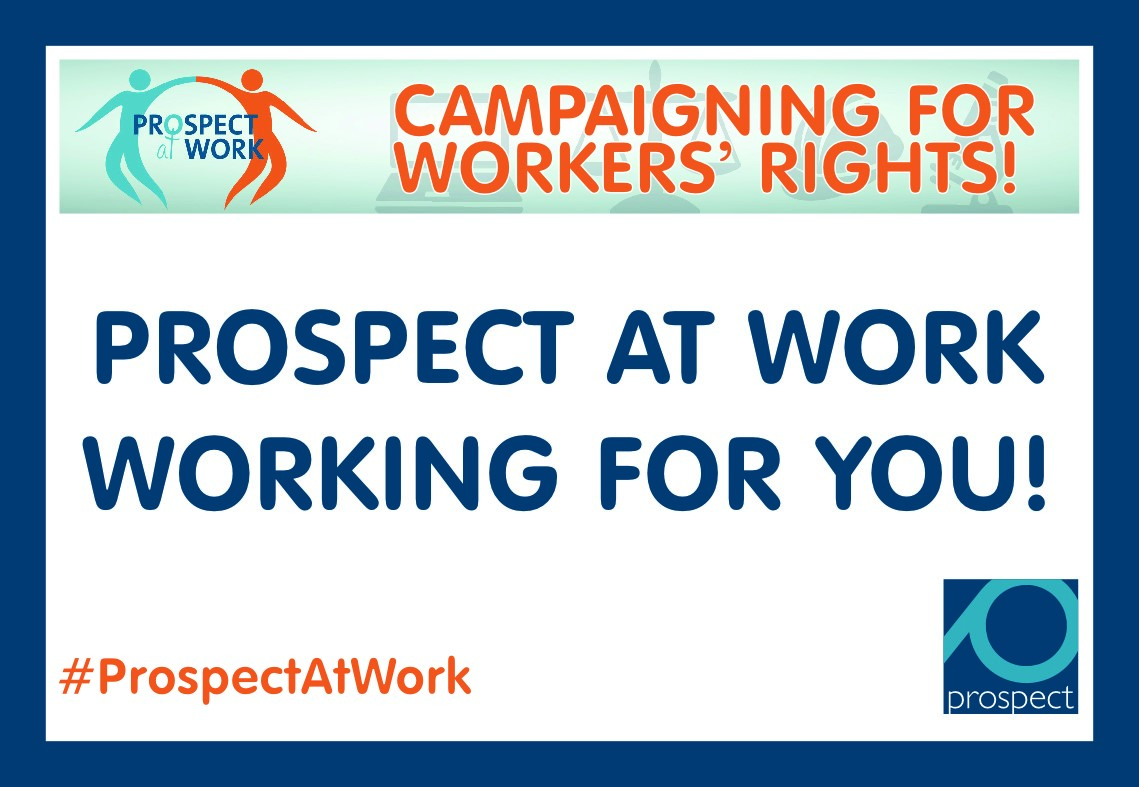 Prospect is encouraging reps and members to use social media to publicise the campaign and value of unions. We are asking you to take workers’ rights selfies – which we are calling WRelfies. Campaign slogans and signs are available for download, for any queries questions email rodney.wheeler@prospect.org.uk The WRelfie page shows lots of Prospect branches and members supporting the camapgin

We have produced an initial report, ‘Working for You’, from the recent survey of reps. You can download this from the website.

The survey is part of our Prospect At Work campaign promoting workers’ rights and showing the real difference that the union makes for members. Our new ‘Working for You’ report draws together two strands of the campaign; the recent survey of reps and our profiles of Workers’ Rights Advocates.

The report looks at who our reps are, the work done in advising members in the workplace, the impact of the cuts in employment law and priorities for future improvements to statutory protection.  In the survey we asked reps to give examples of successful personal cases and collective negotiations and we were inundated with amazing success stories.

As part of the campaign in April we ran a survey to gather information about the work done by reps in  advising members and looking at how the union makes a real difference in the workplace. We also sought your views on the impact of recent changes in the law and what you see as priorities for the future of employment law.

If you have any more detailed comments or case studies arising from the report please do not hesitate to email: rodney.wheeler@prospect.org.uk

Responding To The Trade Union Act

Ele Wade, in introducing the fringe to a full room of delegates, said the Trade Union Act was a fundamental attack on unions. She was delighted to welcome Binder Bansel, head of employment law at our solicitors, Pattinson & Brewer, to give us the latest news on the Act. Ele explained that part of our response to the onslaught on workers’ rights is the Prospect at Work campaign and we would be hearing about the recent survey of reps.

Binder took delegates through the main provisions of the Act. He particularly highlighted the UK’s obligations under International Labour Law and said further restrictions on workers’ ability to strike could well be in breach. Binder feared the new Act would worsen industrial relations and prolong strikes.

A common theme throughout Binder’s presentation was the lack of evidence behind the Act. He said the number of days lost due to strikes in the last 10 years is much lower than in previous decades. He reiterated that Government had failed to demonstrate any need for the new laws.

Marion Scovell, head of Prospect’s legal team, introduced our report Working for You, which has drawn together two strands of the Prospect at Work campaign; our profiles of reps as Workers’ Rights Advocates and the recent survey of reps. The report demonstrates the very real difference that Prospect makes in the workplace.

Marion pointed to the numerous success stories reported by reps, which ranged from overturning decisions to dismiss to securing equal pay. The report also looks at changes to the law in the future. She highlighted that scrapping the TU Bill was high on the agenda of demands, only topped by introducing a law to protect against workplace bullying.

Ele concluded the meeting by stressing how appalling the TU Act is, but recognising the great work done by Prospect reps and that we really can all make a difference.

The campaign kicked off with a month of activities in February, including:

Legal officers have been touring the country to talk to branches about the campaign, workers’ rights & the TUBill. This has included over 15 meetings, from Perth to Swansea, Ipswich to Birmingham and many places in between. See the Wrelfie page for photos of some of the branches we have been meeting with.

‘We can make a difference’ was the positive message from speakers and union activists at Prospect’s Trade Union bill meeting on 2 February. The meeting was organised to launch the  campaign and discuss the implications of the Trade Union bill for Prospect. See news story for a report on the event. 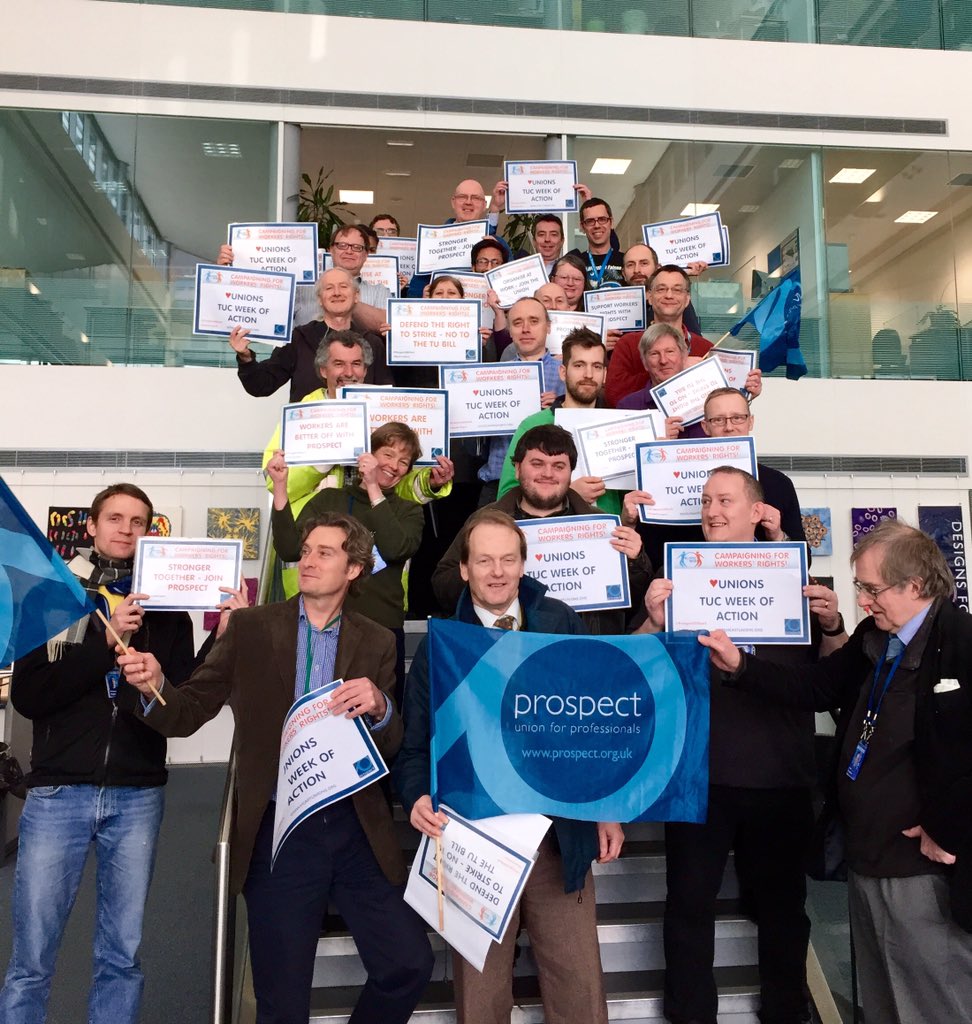 The TUC held a Big Workplace Meeting on Tuesday 9 February. TUC general secretary Frances O’Grady and comedian Eddie Izzard made a live broadcast to discuss the TU Bill. Several Prospect branches had meetings to join the event, including Diamond Light Source (hosting a meeting for other branches at the Harwell Campus), HSE, IPO, Met Office, BT East and West of Scotland, NERC, and several others.

Prospect reps joined a mini-training session by telephone with Marion Scovell, head of Prospect Legal, on 25 February 2016 from 12.30pm to 1.30pm.

We discussed the details and progress of the Trade Union bill and considered what it means for Prospect.

The TUC organised a week of activities against the Trade Union bill from 8-14 February. These included The Big Workplace meeting, encouraging members to sign the petition against the bill and keeping up the lobbying work and focusing on the value of unions.