Save the Forensic Science Service

Stop this crime. Save the Forensic Science Service

Forensic science is an essential part of our criminal justice system. It helps convict the guilty and ensure the innocent go free. But the government is closing the largest forensic provider in England and Wales on the grounds that it “is currently making operating losses of around £2 million per month”. 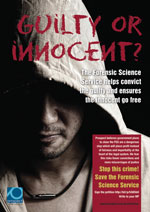 Campaigning by FSS members has succeeded in retaining the cold case archive, currently under the guardianship of the Forensic Science Service, in public ownership following the closure of the service in 2012 and the transfer of its assets to the police and private sector companies.The union is continuing to negotiate TUPE arrangements for staff where appropriate. Three FSS laboratories at Chorley, Chepstow and Priory House, Birmingham have already closed down. Laboratories at Wetherby, Lambeth, Huntingdon and Trident Court, Birmingham, are winding down and will close by next April.

Crime Reduction Minister James Brokenshire MP announced in December 2010 that the Forensic Science Service would close within 12-15 months, with work transferred to the private sector. The announcement was made without any consultation with staff or stakeholders and has astonished experts across the globe.

Prospect represents 1,200 of FSS's 1,800 employees. We are concerned not just about the impact on staff but about how it will affect the criminal justice system and forensic science in the UK. We question the merits of the decision and the way the Minister presented it. Sign the petition here.

Prospect has written to the Guardian following coverage of growing fears over the impact the closure of FSS will have on the criminal justice system and cold case reviews in particular.

The paper has run articles highlighting concerns that the closure is too rushed; police forces are turning to untested providers;  it will 'leave a trail of damage' with the loss of expertise; and that cold case reviews could suffer in particular.

MPs and Home Office Minister Damian Green heard that plans to close the Forensic Science Service could compromise the courts system and leave the country unable to deal with the aftermath of a major terrorist incident.

The warning came from Stalybridge and Hyde MP Jonathan Reynolds as he opened a Westminster Hall debate on the FSS closure on May 17. Click here for a transcript of the debate.

Richard Foster, chair of the Criminal Cases Review Commission, has told the Guardian that the closure of the Forensic Science Service will damage public confidence in the criminal justice system and could leave miscarriages of justice uncorrected.

Written evidence to the Science and Technology Committee's inquiry into the closure of FSS has now been published. Read Prospect's submission as well as evidence from  other stakeholders.

Michael Fabricant, Conservative MP for Lichfield, has written to the attorney general and the Home Office Minister to ask them to think about how FSS research and development can be maintained in the UK.

An Early Day Motion on the FSS closure has been tabled. Ask your Westminster MP to sign EDM 1353.

The Science and Technology Committee has launched an inquiry into FSS closure. Prospect will be submitting evidence.

What others are saying

The arguments against closing FSS

FSS was already undergoing an extensive cuts programme announced in 2009, including the closures of Chepstow, Chorley and Birmingham sites and 750 job losses - part of a government initiative to put it on a more commercial footing. Find out why Prospect warned that this was playing Russian roulette with the criminal justice system.

We believe that the savings targets set by the previous government will be met, and ask what justification there is to go ahead with full scale closure?

What legislation will be introduced to provide protection for the national DNA database's maintenance in the private sector, and how will members of the public feel about commercial ownership of this information?

The majority of successful cold case reviews depend on three key FSS resources - the national and local archives; FSS' specialist cold case scientists; and its pioneering technology. Read why Prospect fears that question marks over the future of these resources could put future criminal cold case reviews in jeopardy.

The forensic science marketplace is extremely fragile and private sector contractors have struggled financially. Of the existing competitors, one has received a warning from their auditors. Another, bought by venture capitalists, is facing a significant redundancy programme. A third has pulled out of the UK forensic market entirely while a potential American competitor has decided against the UK.

What testing has been done to establish that the work currently undertaken by FSS, let alone the spare capacity it provides in event of major incidents such as the terrorist attacks on London, can be delivered in a privatised and fractured marketplace?

Police forces have been expanding their own in-house provision on a small scale for some time. Having the police procure and host their own services could have implications on the impartiality in the criminal justice system. Prospect has serious concerns over the impact of the police bringing more work in-house.

How will small police forces with limited resources conduct ‘peer to peer reviews' or equip themselves with all the necessary specialisms in forensic science?

What will the impact be on victims of crime?

FSS in effect provides a shared service and best practice for a range of customers so that they do not have to provide it themselves. This promotes innovation and research and development.

How will breaking up the service into smaller units with an entirely market focused approach avoid duplication and errors made due to customer demand on costs?

Who will fund research and development that is not guaranteed to return a profit?

Currently the forensic science regulator sits in the Home Office, but has very limited powers and no statutory influence.

What additional regulatory powers will be awarded to the regulator to ensure that there is a level playing field between police forces and private contractors and ensure forensic science has recognisable qualifications and professional codes where currently there are none?

Forensic science in Northern Ireland and Scotland is provided by the public sector and strong arguments have been made by in both to maintain that arrangement.

What costing has been made to suggest that the service provided in England and Wales is more expensive per head of population then the on-going provision elsewhere in the UK?

Since announcing the closure, Prospect has had no further detail over how it is to be managed. We are seeking a meeting with the Minister asking him to give more consideration to what this announcement will mean to criminal justice.

Invest in science to attract newcomers

Plea to MPs on FSS