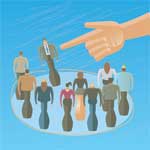 The CSCS sets out the level of compensation that members covered by the scheme are entitled to in redundancy situations.

The legal basis for the CSCS is the Superannuation Act 1972. Amendments to the terms of the CSCS can be made from time to time by means of statutory instruments and according to the requirements of the Act.

The CSCS applies to civil servants and to employees of non-departmental public bodies and other public bodies specified in Schedule 1 of the Act.

The current terms of the CSCS (ie, the terms that are about to be amended) were themselves the outcome of a complicated process of reform that started in 2009 under the last Labour government and ended in 2010 under the coalition government.

Those terms were the subject of an agreement between the coalition government and members of Prospect and three other civil service trade unions.

In July 2009 the government announced its intention to change civil service redundancy pay arrangements. This area of the site sets out the timeline and a Q&A we produced for our civil service members.

July 2009: The Cabinet Office published proposals for significant reductions in the redundancy payment terms that apply to half a million public servants.

December 2009: Despite detailed talks with unions over many months, the Cabinet Office and Ministers said they were pressing ahead with fundamental changes to the Civil Service Compensation Scheme without any meaningful attempt to reach agreement. PCS announces its intention to launch a judicial review.

February 2010: Prospect and four other unions (FDA, the Prison Officers’ Association, Unite and GMB) reached agreement on 2 February with the Cabinet Office on revisions to the compensation scheme.

May 2010: new coalition government sets out its policy to "...reform the Civil Service Compensation Scheme to bring it into line with practice in the private sector."

May 2010: High Court confirms PCS argument that rights that accrue under the Scheme cannot be changed without agreement of all the unions. But it is less than clear in identifying which of the component parts of the scheme are covered by the Judgement. The parties involved were invited to agree how the Judgement impacts on the terms of the CSCS and refer the matter back to the court, where there are matters of disagreement. In the meantime, the terms agreed on the 2 February by the other five unions cannot apply, even where they are beneficial to individuals.

June 2010: Further High Court judgement sets out the extent to which changes cannot be made to the CSCS without union agreement, ie all unions of the CCSU. This finds in favour of PCS's arguments as to the extent of cover of the original judgement. Until government responds with new proposals, the existing CSCS payments that applied before the February amendments are the only terms likely to be paid.

July 2010: public sector in general and civil service in particular now under attack as never before.

Following days of unhelpful speculation, on 6 July we attended a meeting at the Cabinet Office to be given a statement by Francis Maude, Minister for the Cabinet Office. We were informed that in light of the recent court proceedings involving PCS, the Government was taking measures to amend the Civil Service Compensation Scheme (CSCS). You can read the full statement and letter to Paul Noon, Chair of CCSU.

The further court judgement had ruled that the government could not amend the CSCS without the agreement of all the unions, thus establishing that the scheme is based on accrued rights and is therefore protected by law.

The Minister was seeking to take powers under a ‘money bill' to cap the level of payments made under the scheme: 12 months' pay for compulsory redundancies, 15 months for voluntary payments. Both of these are substantially below the existing arrangements, which were found to be legally enforceable by the courts, and they are far below the rest of the public sector.

Maude's statement made it clear that these powers were  to be in place for exits agreed after September. It also said that proposals to amend the scheme in the longer term by legislation would be published for consultation, with a view to conducting further negotiations to seek to reach an agreement. At the meeting with the Cabinet Office we made it clear that both their proposals and the process they intended to pursue were unacceptable to us and we sought an urgent meeting with the Minister.

Prospect asked members to get involved by writing to their MP.  We produced a draft letter which they could personalise, eg by adding information about where they work and in what capacity they are employed. We asked them to send us a copy of any reply they received.

Parliament rose on 29 July, but we planned to continue our political lobbying throughout the summer, so this initial contact with MPs was crucial.

August 2010: Lots of lobbying activity during August. We asked members to write to their MPs, in preparation for the House of Commons second reading of the Superannuation Bill in September - this is the bill that paves the way for changes to the compensation scheme.

September 2010: The second reading of the 'money bill' was on 7 September. This paves the way for massive cuts to compensation payable to civil servants who lose their jobs.

On 9 September Prospect and three other unions lobbied parliament against the bill. Over one hundred members and supporters filled a House of Commons committee room to listen to a succession of MPs, including opposition speakers Tessa Jowell, Jack Dromey and Kevan Jones denounce the bill being rushed through parliament. See our YouTube video about the lobby.

Dai Hudd addressed the TUC Congress on 13 September, and did a number of radio interviews.

On 14 September, Prospect gave evidence to the second sitting of the House of Commons Public Bill Committee on the Superannuation Bill. Later in the month, discussions took place between 5 civil service unions and the Cabinet Office. All the unions, including PCS, were invited to attend the meetings. The government put forward unacceptable proposals to which Prospect and the FDA, POA, GMB and Unite responded in an attempt to arrive at a negotiated settlement. We made significant progress.

October 2010: Prospect, along with five other unions, reached outline agreement with the Cabinet Office.

mid-October 2010: The Superannuation Bill passed its third reading in the Commons on 13 October. The Bill will now go to the House of Lords for further amendment. The POA has now said it intends to reject the outline offer on the compensation scheme, leaving four unions in acceptance.

end-October 2010: Prospect planning to ballot members, but ballot dates on hold due to a small number of outstanding unresolved technical issues related to the proposals to revise the scheme.

November 2010: The Superannuation Bill is at committee stage in the House of Lords.  The Sector Executive are due to meet on 17 November to receive a full report and it will agree the arrangements for the recommencement of the ballot.

Prospect is the union for professionals in the Public Service industry