Reps from Natural England launch report in the House of Commons 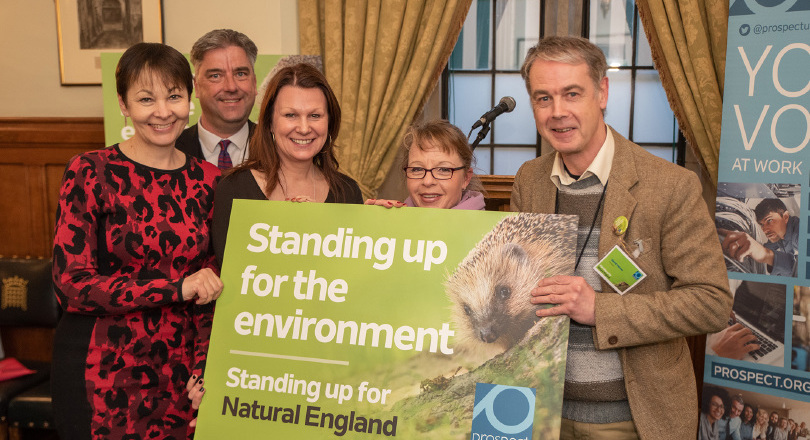 Prospect reps from Natural England descended on the House of Commons on 11 March to launch The State of Natural England, their new report on the effect of cuts on the organisation and the staff who work there.

The reception featured stalls showcasing the vital work that Prospect members at Natural England are involved in: from conservation and regulation to promoting biodiversity across England.

Members were on hand to explain their work to MPs and peers – and to highlight how swingeing budget cuts and the public sector pay cap have impaired the organisation’s ability to fulfil its vital role and damaged staff morale.

Prospect deputy general secretary Garry Graham praised members’ dedication to their jobs, describing them as “ambitious for their organisation”.

Green Party MP, Caroline Lucas, who hosted the event for Prospect, argued that this was a vital time for our environment and that we need to be investing more in its protection, rather than taking resources away.

David Heaver, chair of Prospect’s Natural England branch, explained the origin of the report and the work that reps do on the ground. He made a plea for MPs to “remember Natural England” when it comes to important spending decisions.

Kate Jennings from the Royal Society for the Protection of Birds, an organisation that works with Natural England, said she knew how dedicated the staff are and that they deserve much better from the government.

Sue Hayman, shadow environment secretary, laid the blame for the current situation squarely at the door of the government’s austerity programme.

She told members: “We hear you, we see you and we stand in solidarity with you coming forward and speaking out on this shambolic state of affairs.” Her full speech is available here.

Prospect will continue to work to highlight the situation at Natural England and campaign for a better deal for our members and the environments they protect.