Noel McClean’s passion for trade unions from an early age has culminated in his latest role as the national secretary for members in telecoms. Here he talks about the challenges and opportunities ahead 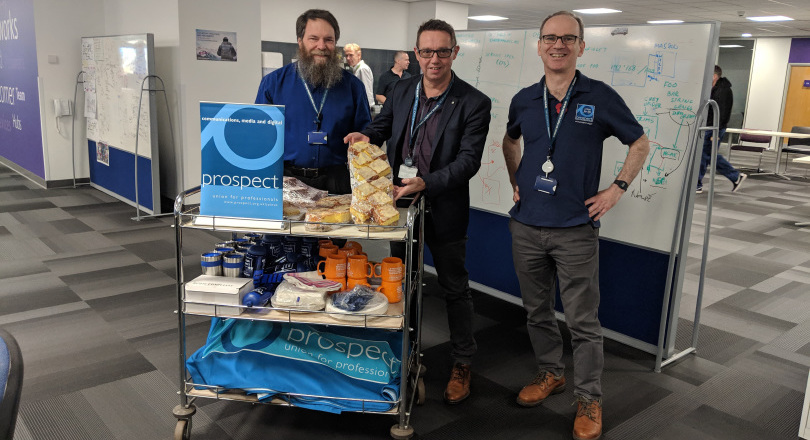 Noel replaces Philippa Childs as she takes up the mantle of new head of the BECTU sector of Prospect.

Before joining BECTU’s staff, Noel was an activist in the CWU, the union for workers in telecoms, postal, administrative and financial companies.

He became a postman aged just 19 in the eastern city of Peterborough. His family had moved from Belfast when he was small. His father, Gerry,  was always a union member and “was a big influence on me”, says Noel.

“For me joining the union was the most natural thing. I went to union meetings and always had something to say.” It was after experiencing a personal issue at work that he stood as the local rep for his depot.

Later Noel was elected to represent colleagues in all depots across Peterborough, and while still in his 20s, the entire PE postcode. In 2000 he won a place on the CWU national executive.

He was based on full-time release at CWU headquarters, conducting national negotiations and supporting the relevant national officer. “I was involved in some of the biggest disputes, grievances and agreements of that period,” he says. He also formed close bonds with CWU telecoms colleagues.

But in 2012 Noel was ready for a change, and successfully applied for his job at BECTU. “I was a new boy for the first time in 26 years. It was strange but I loved it. Everyone was welcoming and supportive.”

After time in the Arts and Entertainment theatre workers’ division Noel became assistant national secretary for the BBC division in early 2017. “I immediately walked into a massive negotiation on the new BBC contracts of employment, covering terms and conditions, the grading structure and policies on everything from annual leave to how work gets scheduled.”

The upshot was a long, tricky negotiation, culminating in a deal that members balloted on and accepted by 77% in June 2018. See story on BECTU website.

Noel identifies similarities between the BBC experience and the task of supporting members at BT, as they face major job losses and changes to terms and conditions via the People Framework.

He says: “The BBC and BT are both British institutions – asked to be part of the UK’s infrastructure but also charged with competing with very commercially aggressive competitors who probably haven’t got the same underlying obligations. In fact you could say the same about Royal Mail – it seems to be a theme of my career!”

Noel wants the People Framework negotiations to conclude “with an agreement that recognises and respects the service members have given to the company for many years and provides a real career path for those just setting out”.

The backdrop is the huge headcount reduction under way at BT among managers and professionals. “We have to ensure people who leave do so on terms that give them dignity, and those remaining have a manageable workload and good career prospects.”

Noel is already impressed with the expertise and professionalism of the Prospect lay reps on the BT committee.

He also looks forward to working with members in other telecoms workplaces “who also want certainty, job security and decent jobs and conditions”.

Noel is excited to join the management team taking BECTU into its next chapter. He believes the C&D division sits well within the sector because of the growing overlap between telecoms and broadcasting.

More broadly, Noel feels good progress is being made after BECTU’s merger with Prospect in 2016. “Cross-pollination of ideas and experiences is a good  principle and practically it makes us a fitter, stronger and better equipped organisation.”

Recruiting new members and encouraging new activists are priorities. “The union gives you that added layer of protection, support and advice.

“For anyone thinking of becoming a rep, it is quite possibly the most rewarding thing you will ever do; I have certainly found that.”

Outside work Noel is married to Angie, who teaches children swimming and fitness. They have five of their own – Shaunagh and Erin in their 20s;  Jack, 11; Maddie, 10 and Orla, 7.

“I used to have hobbies till children came along – I even used to scuba dive,” he laughs. Noel still follows the ups and downs of local football team Peterborough United.

But above all: “I love being a dad. It’s a bit noisy but I wouldn’t have it any other way.”