Whether it’s promoting Prospect membership or plugging Shakin’ Stevens’ new album, Lloyd Sloan's energy is palpable. He tells Penny Vevers why he became a union rep and what inspires him 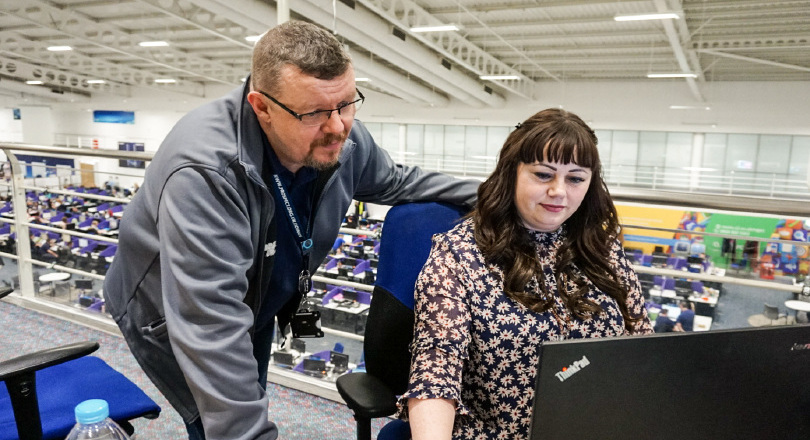 Talk to Lloyd Sloan about his long-standing association with Shakin’ Stevens, the Welsh rock and roll singer/songwriter, and his passion shines through.

It’s also heartening to see Lloyd equally enthusiastic about being a Prospect rep for colleagues on the Tesco Mobile contract at Capita.

Lloyd has worked with Shaky, advising about PR, online marketing and social media, since 1999. Even when he changed career eight years ago, Lloyd – a musician himself in his spare time – continued working with Shaky and his partner Sue. So he was thrilled to be invited to join Shaky’s 2017 British tour promoting his first album in six years, Echoes of our Times.

“It’s Blues, Americana and Roots based – which suited me entirely as that’s the sort of music I’ve been performing for years.”

Luckily for Lloyd, his employers at Capita were willing to be flexible and released him on six weeks’ leave.

At work, Lloyd is an operations manager on the Tesco Mobile contract, responsible for 150 staff, at Capita’s vast Preston Brook call centre in Runcorn, Cheshire.

As a union rep, he looks after Tesco Mobile members at Preston Brook, Bury and Leeds.

Up to 2010 Lloyd’s varied career embraced teacher training, PR, advertising and marketing and running a couple of pubs. ”The pub trade wasn’t doing well so I took a tentative step into employment by joining Telefonica in 2010, expecting to stay a couple of months.”

He is still there but has seen many changes. In 2013 the O2 side of the Telefonica business was TUPE-transferred into Capita. Lloyd was closely involved in helping negotiate the protection of staff terms and conditions.

Asked why and how he became a rep, Lloyd laughs. “I was railroaded into it! I’d always been a union member. One day full-time organiser Mary Hurley (now retired) came to visit and said they needed another rep because the contract was so big.

“Another guy pointed to me and said: ‘He’ll do it.’ I went for a coffee with Mary, and she persuaded me.”

He has no regrets. “I attended Prospect training courses – essential skills, case handling, negotiating, health and safety and employment law – and gained a lot of insight into the rights of workers.”

Lloyd is proud of the good relationship between Prospect and the employer, saying: “There used to be a lot of firefighting, but now that has turned on its head. We have a proactive relationship with management, and they consult us.”

Capita hit the headlines in January. Its share price fell after it issued a profits warning in the wake of the collapse of the private sector facilities management and construction services company Carillion.

A Prospect member update noted that the media narrative in the wake of Carillion’s collapse was focused on the outsourcing of public services, adding that “while Capita does have a number of government contracts our members in O2 and Tesco Mobile are located in the private sector”.

Lloyd acknowledges that members will be worried, but adds: “Although both outsourcers, I view the two companies to be very different. Carillion had a major focus on construction and private finance initiative projects but this isn’t the case with Capita.

“I believe Capita has the experience and resources required to realign the business successfully, although I acknowledge that the announcement on 31 January hasn’t made shareholders happy.

“All this makes it even more important to be a Prospect member, and we will be doing all we can to represent their interests in times of uncertainty.”

He sees Brexit as a good example. “Take the EU legislation that ended mobile roaming charges last year. People are worried because we don’t want to get back in a situation where charges are so high that we lose customers.

“One of our reps is Polish. How is it going to affect her? Because we are not politically affiliated we can say it as it is, without having to toe any party line. We are also at the front of any discussions about workers’ rights.”

He adds: “When I was on tour with Shaky I noticed that single venue we visited – major theatres throughout the country – had a BECTU noticeboard.”

Ultimately, he believes, the more members, the stronger the union. “At Preston Brook we have 100% membership among Customer Care managers. This gives us a collective voice, and it’s listened to. A choir sings louder than any individual.”