How can we build strong, relevant, modern unions that can withstand the challenges of the changing economy and continue to grow? That was the theme running through a packed Unions 21 conference at the Royal College of Nursing in London on Tuesday (21 March). 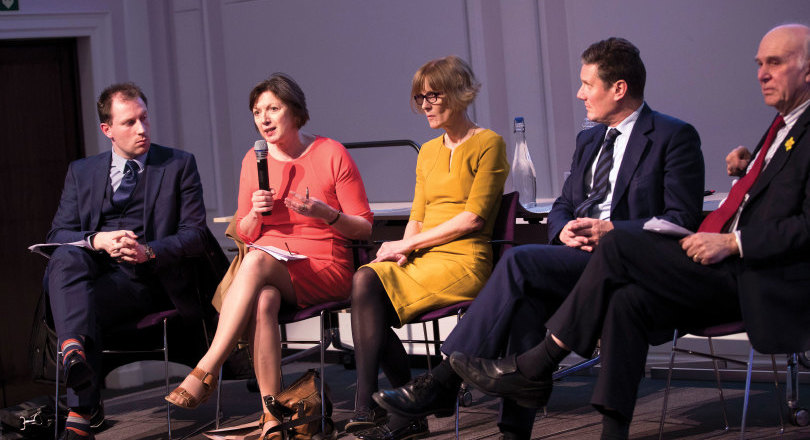 An impressive array of speakers covered the topics of “new economies, new workers”, good work and devolution, how unions can be digitally successful and, last but not least, “are we ready for Brexit?”.

A new booklet, “The Changing World of Work”, based on work by the National Institute of Economic and Social Research, was introduced by Becky Wright, the director of Unions 21, which seeks to help unions increase their influence.

Wright said the research aimed to encourage unions to discuss strategies and approaches to put them where the workforce is, not just now but also in the future.

Unions in the new economy

Tim Roache, GMB general secretary and Philip Blond, director of the thinktank ResPublica, kicked off by each seeking to answer the question: “In the new economy will unions struggle to find a home?”

Roache pointed out that there was an urgent need to be proactive about trends in the gig economy.

The gig economy provided “insecure work, flexible work at best and utterly inflexible work at worst, where people are hired and fired daily, where people have such difficult terms and conditions at work that they urinate in drinking fountains because they haven’t got time to go to the toilet”.

But unions should not assume that its worst features were inevitable and should focus on getting a fairer deal for workers.

“Let’s challenge the negative vision for the future of our economy that some employers have. Let’s demand, let’s organise and let’s campaign for something better.”

He highlighted GMB’s role in the landmark judgment to get Uber cab drivers treated as “workers”.

And he described working conditions at the warehouse of online retail company ASOS in Yorkshire, where a freedom of information request had shown 120 ambulances turning up within two years.

Philip Blond said that while he feared unions may not have a future, he hoped they did as they were urgently needed.

He wanted to hold prime minister Theresa May to her speech on entering Number 10, asking: “What would it be for the Conservative Party to genuinely be a party that’s pro-worker?”

Blond added: “Quite simply the private sector has been gaming everybody, particularly workers and therefore the government.

“If we live in a world in which people are made more and more insecure, in which wages don’t deliver, what we are producing is a population that is asset poor, incredibly economically fragile and poorly skilled.

“The government has to pick up the tab for that. If we create people who don’t own anything, we will always have a demand for massive welfare state investment.”

Blond believed there was a “new settlement to be had” for “the working classes of this country”. This should involve collective bargaining, which would serve the “national interest”. Pushing up aggregate skill levels should also be part of it.

He advocated the idea of workers becoming shareholders in their companies, with new types of asset and ownership. Trade unions could be run as entrepreneurial co-investors within the businesses they served and play a bigger role in small and medium-sized enterprises.

Blond saw the mutualisation of parts of the public service – a “third pathway” – as part of this vision, while acknowledging that “much of this is outside your comfort space”.

Janine Dyson, England lead for devolution and integration at the Royal College of Nursing, and Amy Lame, London’s first night czar and a member of the BECTU sector of Prospect, offered perspectives on the challenges and opportunities for unions within devolved authorities.

Dyson shared her experience of working with the Greater Manchester combined authority on delivering health and social care.

A memorandum of understanding had been signed in 2015 around health and social care by 37 organisations, including all the local authorities, NHS providers, clinical commissioning groups and NHS England.

There were still many unresolved tensions and a complex accountability structure. But Dyson had helped to ensure that during the changes, the unions would be listened to and their members protected. They participate in a strategic workforce board, a workforce engagement forum and various local structures.

While it was not perfect, different unions were working together and engaging with the Greater Manchester authority.

“Shining a light on night-time workers” is important to Amy Lame, who said the night-time economy in the UK was worth £66bn and created major economic and cultural opportunities.

She was collaborating with City Hall colleagues on a common vision – on legislation to protect live music, mitigating the impact of business rates, making London safer for women and improving the night tube. She was using her convening power to bring unlikely friends together across the political spectrum, as well as the police, revellers and visitors.

“Working together with trade unions is abolutely vital to our success here,” she said. “The people who work at night range from nurses to security guards, fire fighters to taxi drivers, cleaners to journalists. I’m working hard to safeguard pubs and live music venues, the backbone of night-time culture.”

With 1.3m people employed in the night-time economy and 10% of UK employees regularly working a night shift “we need to make sure they have equal pay and access to  the same rights as those who work in the day, including facilities, support and trade union representation”.

Nick Anstead, an academic at the London School of Economics, is leading a project on the relationship between trade unions and digital technology and what unions need to do to succeed.
He said its objectives included understanding the ways unions very different from each other are using online communication; looking at the risks and opportunities; finding examples of best practice and building expertise via a Unions 21 “fellows” scheme.

The research had thrown up many questions, such as whether union website content should be for everyone or those who paid dues and highlighted tensions between digital democracy and bureaucratic structures.

Other challenges included whether unions had the necessary skills and resources, and how these technologies related to the fundamental goals of an organisation.

Are we ready for Brexit?

Next followed a timely debate about the workplace challenges in the run-up to Brexit.

It was led by a panel comprising Keir Starmer, shadow secretary of state for exiting the EU; Frances O’Grady, TUC general secretary; Neil Gray, SNP shadow spokesperson for fair work and employment; and Vince Cable, Liberal Democrat and business, innovation and skills secretary in the coalition government from 2010-15.

Among others, they answered questions on protecting workers’ rights, whether there should be a further vote on the outcome of the negotiations and the future of science.

Frances O’Grady opened by stressing that workers must not pay the price of Brexit. The rights fought for by unions across borders and guaranteed by the European Court of Justice must be protected and continued.

“We don’t want British workers ending up undercutting our friends in Germany, France Italy and elsewhere because our rights are falling behind.”

Nobody had voted to reduce workplace rights, said Keir Starmer, but “there’s a real risk that that will now happen because we are at a crossroads with article 50 being triggered next week.”

He warned that crashing out of the EU without a deal would place workplace rights at risk. There would be problems but the Great Repeal Bill could provide an opportunity to lift current rights and entrench them in domestic law.

Vince Cable said the great irony was that if the UK crashed out, it would be subject to the rules of the World Trade Organisation. This operated on the same judicial principles as the ECJ but had a very narrow mandate and was purely concerned with the commercial aspects of a dispute, and not workers’ rights or good environmental practice.

Neil Gray said a lesson of the 2014 Scottish independence referendum had been “a slew of broken promises” from the government. “So my strong recommendation is to continue what the TUC has been doing already, and campaign to ensure ensure workers’ rights will be front and centre of any deal.”

*See blog by Unions 21 chair and Prospect deputy general secretary Sue Ferns: Unions are most effective when they focus on a common goal