Prospect members will be taking to the streets of London on Saturday 8 July to make the case for LGBT equality as part of London Pride. 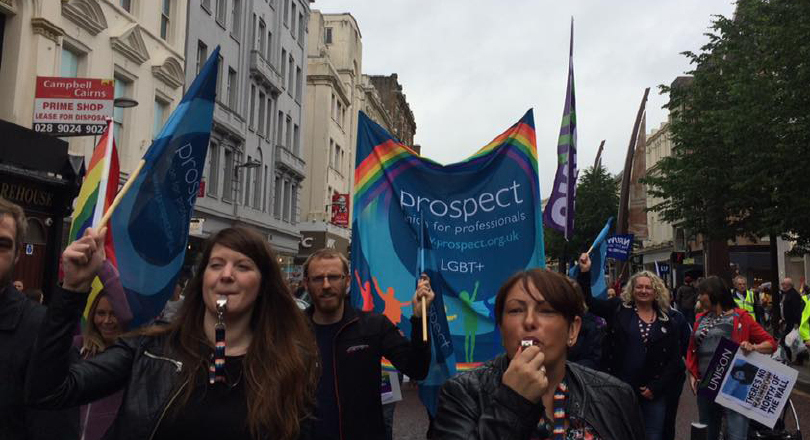 Trade unions have always been central to Pride and campaigning for better representation and rights for LGBT members.

After the terror attacks on London and following a rise in homophobic hate crimes around the world, this year’s Pride is as important as it ever has been.

Despite progress on equalities in the UK, big challenges remain for the LGBT community:

Around the world, the rights of LGBT people are under attack – from the US, where President Trump has been rolling back progress that had been made, to Russia and Chechnya, where LGBT people suffer persecution and physical violence, and beyond.

Last week, Prospect members joined 20,000 people to march through Belfast in an event organised by the Love Equality coalition to campaign for marriage equality. Our members are working with the Irish Congress of Trade Unions and other campaigners to keep up the pressure on Northern Ireland politicians to deliver equality.

Claire Mullaly, secretary of Prospect’s BT branch in Belfast, was a leading campaigner in the Love Equality march last weekend. She said: “Northern Ireland is the only region in the UK and Ireland where marriage equality is not legally recognised, and attempts to legislate for equality are continuously being blocked. This has to change, and we are not alone in trying to change it.”

Prospect will be taking part in London Pride on 8 July alongside other trade unions, and is supporting Pride events across the UK.