The importance of the UK defence’s sector and its workers to Prospect was highlighted by deputy general secretary Dai Hudd at a meeting of BAE workers in Portsmouth naval base during Union Week. 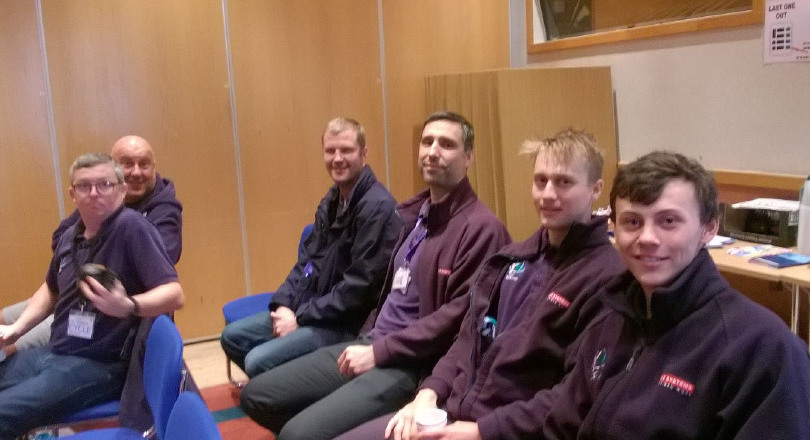 Earlier, a colourful Prospect stall in the foyer of the BAE building had attracted dozens of people to come over for a chat.

Promoting the value of membership and handing out freebies on Thursday (6 October) were Prospect’s BAE Surface Ships branch secretary Tom James, full-time negotiator John Ferrett and executive assistant Shawn Sanderson. Three people joined on the spot and many others took away forms to complete.

At the meeting Dai Hudd said in his whole working life of just over 42 years, he had never seen so many uncertainties as in the current challenging times.

The year 2008 had seen the biggest financial crash in modern times and “we have not come through that yet”, while 2015 had been the warmest recorded year in the planet’s history.

The outcome of the EU referendum meant even more uncertainty. “It’s a bit like a family out for a winter drive and the car hits black ice. Depending on how the car spins you’ll ultimately work out whether the family is better or worse off. In some ways that’s exactly where we are.”

Hudd stressed Prospect’s political independence from any party, and highlighted the results of a member survey after the 2015 election – 25% voted Conservative, 29% Labour, 12% Liberal Democrat, 7% UKIP, 6% Green, 5% SNP, 1% Plaid Cymru, 1% the Northern Ireland parties and 2% others or didn’t say.

“Prospect really does, in terms of its membership, sit slap bang in the middle of the political spectrum. But that doesn’t mean that as a union we don’t have a view of the political landscape.

“The issue of Brexit hits us as a union centrally, affecting nearly everything our members do.” This included uncertainty over pensions and investment in the private sector, including defence companies.

Brexit was not the only issue. “The UK economy in the last 12 months has been the fastest growing in the G7. However it masks fundamentally structural flaws in the way we organise work and our economy and pay and reward our people.”

UK workers had had lower pay increases than the whole of Europe, and worked longer hours than their European counterparts. International statistics on productivity placed the UK at the bottom of all the G7 countries.

This all reflected a lack of investment in skills, training and technology, an agenda Prospect was determined to address with its good work agenda and other work on productivity.

Even the government recognised that the world of work had to move centre stage “and that creates an opportunity for unions we’ve not had in more than a decade”.

On defence, there had been a Strategic Defence and Security Review in 2015. Prospect would campaign for another SDSR in the run-up of the launch of Article 50 because the world looked fundamentally different after the Brexit vote.

Hudd quoted from a Royal United Services Institute report saying: “A UK exit from the EU would be a strategic shift as profound as that experienced by the country in the late 1960s and the early 1970s. Between 1967 and 1971 the UK withdrew the bulk of military forces from South-east Asia and the Persian Gulf (east of Suez).”

Some Brexiteers wanted to see the UK become a global player but “you can’t do that without taking another look at your strategic defence capability, which at the moment is on the presumption of a European theatre not a global one”.

Unlike some other unions, Prospect had always been consistent in its attitude to defence policy and supporting the sector’s workforce, Hudd stressed.

“Prospect has always had at its core, in its DNA, defence industries and defence workers as members. We believe this is right for our nation and our security.”