George McBride’s headstone, unveiled in Clandeboye Cemetary earlier this month - almost 30 years after his death - commemorates a remarkable tale of love and solidarity. 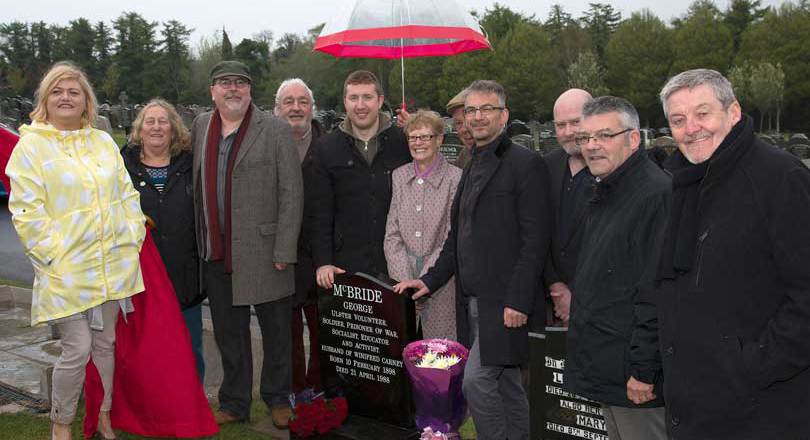 George was a trade union activist and socialist born in Belfast in 1898. Age 15, he joined the Ulster Volunteer Force. When the First World War broke out he enlisted, fought at the Somme and was taken prisoner.

On his return home he finished his apprenticeship in a Belfast engineering works, was an active trade unionist and member of the Northern Ireland Labour Party, and became an economics tutor for the National Council of Labour Colleges.

He was also active in the United Movement of the Unemployed Workers in the Outdoor Relief Strike of 1932 and, at the age of 84, spoke at the 50th Anniversary Seminar on the Strike organised by the Workers’ Educational Association and the Belfast Trades Council.

In 1928 George, a unionist from the Protestant Shankill Road, married Winifred Carney, a Catholic nationalist. Winnie was a member of the Citizen Army and was one of the few women fighting against the army in Dublin 1916, the same year George was fighting in the army at the Somme. By the time they married Winnie had joined the Labour party and was concentrating her energies in the local Labour movement.

Winnie died in 1943 and George outlived her by 45 years. He died in 1988, spending his last years in the Somme nursing home, and was buried in an unmarked grave in Clandeboye Cemetery.

“George and Winnie’s tale is about more than just love across the barricades,” said Prospect National Trust member Paul Stewart, who attended the unveiling ceremony.

“George dedicated his life to the struggle against injustice and inequality. Their story is an example of the unifying power of their love of humanity as expressed through their shared belief in trade unionism & socialism.”
The headstone was organised by Belfast and District Trade Unions Council in partnership with Unite, Ann Hope and Bill Rolston. The unveiling was followed by a reception at the Somme Heritage Centre near Newtownards. Tributes were paid by Peter Bunting of the Irish Congress of Trade Unions and members of George and Winnie’s family.

The event concluded with a moving theatre piece performed by the Kabosh Theatre Company exploring aspects of their story.